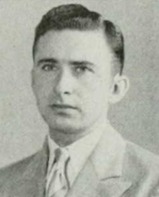 Paul Charles Nicek was born in Chicago in 1923.  His parents, Carl and Marie, had lived for several years in Chicago, where Paul and his sister, Marie, were born.  The family was from Czechoslovakia (now the Czech Republic) and returned to their homeland soon after the birth of Marie.  Paul’s younger siblings, Charles and Alvin were born there.  As tensions mounted after Adolf Hitler took power in Germany, the Nicek family fled their homeland for good in 1934, this time heading for Oklahoma City.  Carl was a bookbinder and easily found employment, while the children attended Putnam City schools.

After graduating from Putnam City High School, Paul headed to OU to study architecture.  He arrived at the university around the same time that Bruce Goff began teaching there.  Sadly, in 1946, his 16-year-old brother, Alvin died when the horse he was riding hit a car, panicked, and threw him to the ground. Later, Paul named his son after his lost brother; Alvin would become an architect like his father and uncle.

While still in college, Paul married Irene Barton.  He graduated around 1949 and went to work as a draftsmen for Hudgins Thompson Ball.  His younger brother, Charles joined him there after he, too, graduated from OU.

Paul remained in Oklahoma City until he retired when he moved to Arizona then Idaho.  He died in 2008.