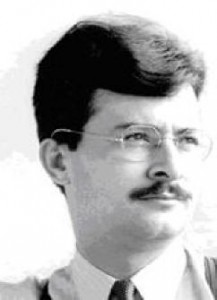 Born in 1907 in Des Moines, Iowa, he graduated from the University of Illinois in 1930 and received his Masters in Architecture from Columbia University, as well as a Certificate of Architecture from the Beaux Arts Institute of Design in New York two years later.  After a year working as an architect for the Rural Resettlement Administration, Kamphoefner found himself at OU in 1937 in his first-ever teaching position working under chairman Joseph Smay.  By 1944, he was the unofficial Dean of the School of Architecture and the official Coordinator of Campus Planning; he and a few of his co-workers devised a plan to modernize the OU campus, which was lauded by boosters and national publications alike.  By 1948, he was at the top of his game at OU when he, along with four other professors, suddenly resigned and announced that they all would be moving to North Carolina State University — Bruce Goff took his place as Chairman.  At NCSU, Kamphoefner was free to create his own architecture program from scratch and students were soon coming from all over the nation to join the innovative program.  Kamphoefner remained at the university for the rest of his career and died in 1990 at the age of 83.