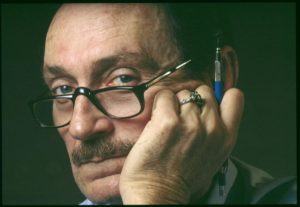 Born in Oklahoma City, Ray spent his childhood living all over the state while his father worked on Works Progress Administration (WPA) highway projects, but the family returned to the city when domestic projects were cut at the outbreak of World War II.  He spent the rest of his school years in the Metro, graduating from the old Classen High School after the war.  Then, he headed off to Norman to study architecture with Bruce Goff.  During his time in Norman (which was interrupted for two years when he joined the Air Force), Ray developed lifelong friendships with many of his fellow students and even helped to work on the foundations for the Bavinger House (he returned to school at OU in time to see it completed in 1955).  After graduating, Ray worked in several small towns for different architects: Tom Rogers in Enid, Paul Harris’s firm in Lawton after Harris died, and Albert Ross in Ada.  Finally, he started his own firm in Ada (and later bought out Monroe Parker’s firm) and began designing some of the area’s most impressive buildings.  Ray remained in Ada for the duration of his career and died there in 2014.

Go here to read a great article about Ray James and his life in the Ada News.

* Ray James had his own firm then was a partner with Monroe Parker from 1966 until Parker retired in 1969.  He bought out Parker and named the firm Ray James & Associates.

Ray James: A Small-Town Architect Who’s Still Looking Ahead
Through the Viewfinder: A Vintage Look at Ray James’ Gwin House