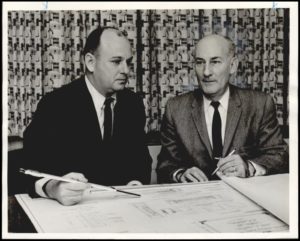 Bill Howard (left, above photo) was born in 1923 in the tiny hamlet of Olustee and grew up in the small town southwest of Altus.  He attended OU during Bruce Goff’s time there, graduated in 1948, and later studied under Frank Lloyd Wright at Taliesin.  Upon his return to Oklahoma, he set up practice and was as prolific as he was creative during his 50-year career, designing well over 1,000 buildings during his 50+-year career, including some of the best examples of modern architecture in Oklahoma City.  Howard died in 2012, but his firm lives on and is now run by his twin sons.