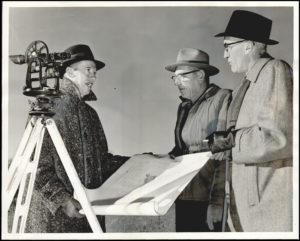 John C. Hope (pictured to the right in the above photo) was born in Kansas City in 1901 and moved with his family to Oklahoma City three years later.  He graduated from Washington University in St. Louis with a degree in architecture in 1924 and completed several more traditional projects, including the Fairview Community Center in Fairview, the Kappa Kappa Gamma House at OU, and Commons Hall at Northeastern University in Miami, before going to work for Sherman Machine and Iron Works in 1942.  He remained with that company until his retirement and he died in 1969.