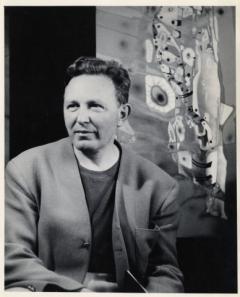 Born in Kansas in 1904, Goff and his family moved to Tulsa while he was still a child.  His natural drawing ability led his father to apprentice him at the age of 12 to Rush, Endacott & Rush, and he so impressed the architects there that he was soon designing buildings on his own.  He became a partner in the firm in 1930, but the Great Depression slowed building in Oklahoma down so much that he left the Sooner State for Chicago in 1934 to teach at the Academy of Fine Arts.  He designed several homes in the area before the outbreak of WWII motivated him to join the Navy as a Seabee.

After the war and some part time work, Goff found himself back in the Sooner State in a teaching position at the University of Oklahoma in January 1947.  That very semester, the acting head of the School of Architecture, Henry Kamphoefner, and several of his associates defected from the university to North Carolina State University, and Goff found himself, a man with no college degree, appointed Chairman mere months after his arrival.  From 1947-1955, Goff taught, inspired, and mentored a generation of eager students, many of whom travelled from the far reaches of the country and abroad just to study with this master of organic modernism.  Sadly, the Utopia Goff created at OU ended as suddenly as it began when he was force to resign in 1955 amid allegations of “endangering the morals of a minor.”

Although his departure from a job he loved was devastating, Goff was a survivor and moved to the newly completed Price Tower in Bartlesville to set up his own practice.  He remained there until the mid-’60s before moving to Kansas City then finally settling in Tyler, Texas, where he died in 1982.

Featured on the Mod Blog: