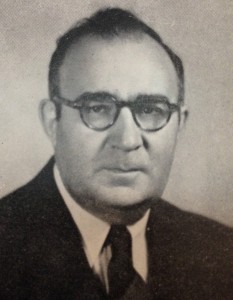 Mendel Glickman was born in Russia in 1895 and came to the U.S. while still a child.  He graduated from Tri-State College in 1921 and worked for William D. Darby and other architects in the Milwaukee area until 1929, when he returned to his homeland to work as the chief American engineer building a tractor plant in Stalingrad.  After returning to the States in 1931, he met Frank Lloyd Wright and became a Fellowship teacher of structural engineering at Taliesin in 1932.  The two men became fast friends, with Wright admiring and trusting his friend so much that Glickman worked as Wright’s engineer on nearly every project the architect designed and built until his death in 1959.  Yes, every project, including Fallingwater, the Johnson Wax Building, the Guggenheim Museum, and Oklahoma’s own Price Tower.

After his stint at Taliesin, Glickman returned to Milwaukee and practiced with William D. Darby from 1933-36 and Frank Kirkpatrick from 1936-38.  In 1938, he set up his own office in Milwaukee but by 1940 he was once again working with Darby.  In 1949, Bruce Goff invited Glickman to move to Norman to teach structural engineering courses at OU and he accepted.  Glickman remained at OU for the rest of his career and even became Chairman of the School of Architecture.  He died in Norman in 1967 and is one of the few of Frank Lloyd Wright’s non-family members to be buried in the master’s intimate Unity Chapel Cemetery in Wisconsin.

Engineer for the Price Tower in Bartlesville