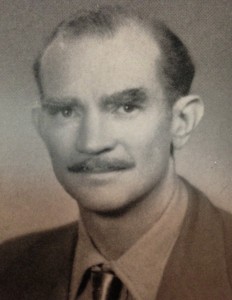 J. Palmer Boggs was born in Bartlesville in 1906 and graduated with a B.S. in Architectural Engineering from MIT in 1930.  He worked for various firms until World War II, when he worked on government projects.  After the war, Boggs started a practice in Denver and gained attention there when he began incorporating rammed earth construction on several of his projects.  In 1950, he was offered a teaching position at the University of Florida, where he remained for a year until returning home to Oklahoma when Bruce Goff offered him a teaching position at OU.  He arrived in Norman in 1951 as an associate professor and was given a full professorship in 1956.  During his years in Oklahoma, Boggs also worked as Goff’s structural engineer on several projects, including the Gelbman House in Florida and the Harder House in Minnesota.  Boggs remained in Oklahoma until the early ’60s, when he moved on to the University of Arkansas to teach until his retirement.  He died in Arkansas in 1987.