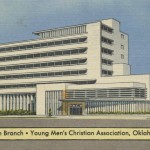 The downtown YMCA was a magnificent building, one of the best examples of modern architecture in OKC. Designed by Sorey-Hill-Sorey and built in 1952, it was a real standout with its dramatic horizontal lines and sleek look. According to an article devoted to the firm in the winter 1993-94 issue of The Chronicles of Oklahoma, “its asymmetrical composition, recalling elements of both the Dutch De Stijl movement and the International Style, was a startling departure from the Neoclassical, Italian Renaissance, and Art Deco style buildings in the area.” 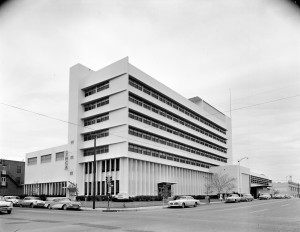 Because it sat across the street from the Murrah Federal Building, the Y sustained heavy damage in the OKC bombing in 1995 and remained unoccupied, its fate in limbo for several years. Several studies concluded that the building could be saved, but some geniuses thought that downtown needed another parking lot, and, as the building was about to be declared a landmark, it was demolished on the sly before anyone could take action. So, the site is now a parking lot. Sad.

The failure to save this magnificent structure deeply pained many citizens and preservationists in OKC, so much so that when the word got out a few months later that the Gold Dome at NW 23rd and Classen would be coming down to build a Walgreen’s, the community swiftly came together and organized an effective and prolonged protest, which ultimately saved the building. So, the demise of one building likely saved the other.

Read more about the downtown Y’s fascinating history and the long fight to try to save this beloved building on the Mod Blog.