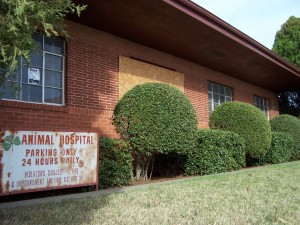 The Shamrock Animal Hospital was located in a great little flagstone 50’s building.  Dr. Warren Schilb opened his hospital in this space on March 25, 1956 and remained in business here until a fire severely damaged the building in December 2007.  Here’s an Oklahoman article about the fire:

One man was arrested at the scene of a fire that killed three cats at a northwest Oklahoma City animal hospital Friday evening. The blaze may have been the work of an arsonist, authorities said.
Seven dogs were rescued but three cats died in the blaze at the Shamrock Animal Hospital, 2847 NW 57, at May Avenue, Battalion Chief Mike Kelley said.  Firefighters were called to the area about 5 p.m. and found heavy smoke coming from the one story building, Kelley said. It took about 15 minutes for firefighters to extinguish the flames, Kelley said. No people were hurt in the fire that caused about $15,000 in damage.  Kelley said one of the dogs, however, was given oxygen after it was pulled from its cage inside the building.

The cause of the fire was still being investigated Friday night, but Kelley said the department’s arson investigators were called because it “looks like” the blaze may have had “more than one point of origin.”
Police arrested Warren Schilb at the scene on a complaint of interfering with a fire scene, Sgt. Mike Knight said.  Knight said officers at the scene tried to keep Schilb, the hospital’s veterinarian, from re-entering the building, but he managed to break free and go back in. Schilb then came back out of the building with a “smoking” mop and began swinging it at the officers — apparently trying to “keep them at bay,” Knight said.  Kelley said he noticed police “had someone on the ground” when firefighters arrived.  Danny Kennedy, who identified himself as Schilb’s son-in-law, said the 83-year-old Schilb is the business’ owner as well as its veterinarian.  He said he does not know why Schilb fought with police or what caused the fire, but claimed Schilb has dementia.

“I guess now we’ll have to go bail him out,” Kennedy said.

Thelma Fowler, who said she has been an employee of the business for the past 10 years, said Schilb was the only one at the business after she left for a doctor’s appointment about 3:30 p.m. She said she does not know what caused the fire.

The building sat damaged and vacant for nearly two years before it was demolished in 2009. 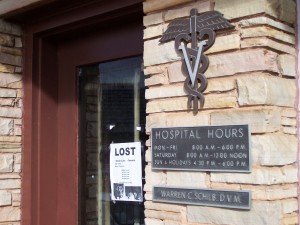 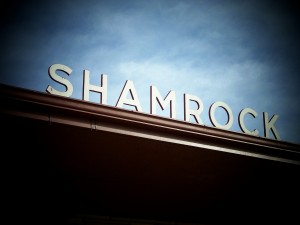