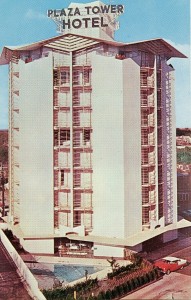 The Plaza Tower Hotel was the first hotel built in OKC since the Skirvin Tower was completed in 1938, and it started life in a grand way, with gala openings and effusive accolades from the media.  Here’s what a newspaper article from 1960 says about the Plaza Tower as it was being built:

“Designed using a diamond module to produce a hexagonal floor plan, the modernistic structure will have eight guest rooms per floor (it was a 10-floor structure).  Rooms are designed to accommodate either single or family occupancy.

Each floor will contain approximately 5,000 sf of floor space.  The ground floor will house a lobby, dining room, and shops complimentary to hotel operation.

Unfortunately, the mid-century stunner seemed ill-fated almost as soon as its modern glass doors opened for business in 1960.   The Plaza Tower was constructed next to the ever-expanding St. Anthony medical complex, and even though it was moderately priced and the only hotel in the Midtown area, it never really took off.  Other than the hospital, Midtown was quiet and didn’t see a lot of tourist traffic, resulting in very few guests paying to spend the night in the hotel with all of the crazy angles.  Within a few years, the languishing hotel went under, and the building was converted to office space and renamed the Shartel Professional Building.

The Plaza Tower remained a fairly successful office complex for the next 10 or so years until another, much more traditionally shaped square box was constructed across the street.  Tenants must have preferred squares over angles because once the new building was completed, occupancy rates at the Plaza Tower began to plummet.  The ensuing banking crisis and oil bust of the early 80’s didn’t help matters,  and the building’s bad luck continued when, in 1983, a mentally ill man jumped to his death from one of the top floors.  Although it was announced in 1986 that the beautiful-but-doomed Plaza Tower would undergo yet another conversion — this time to an elderly living center — the continuing economic downturn kept cash-strapped developers from pursuing the plan.  Two years later, OKC’s most modern hotel was unceremoniously demolished, leaving a vacant lot and a triangular concrete planter as sad reminders of this hexagonal, mid-century masterpiece. 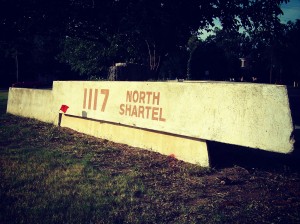 This Mod Blog features a brochure from the hotel soon after it opened.  It’s good stuff.