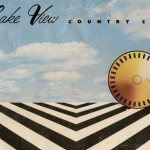 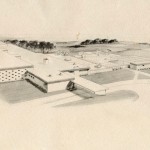 Located in the rapidly developing area just south of Lake Hefner, the sparkling new Lake View Country Club was well positioned to lure upwardly mobile, mid-century families moving into freshly built ranch houses in the Coronado Heights, Highland Hills, Wileman, Lakeside, and Lakepointe/Edgewater neighborhoods into joining and living it up, leisure style.  In fact, before the $700,000 clubhouse even opened in 1955, Lake View already boasted over 600 members.  When it was completed, the glamorous club featured some sophisticated and very modern interior design: 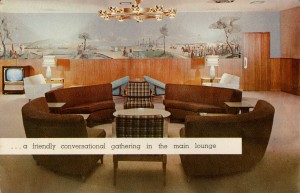 Plenty of party and dining spaces: 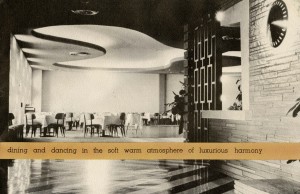 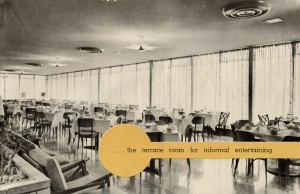 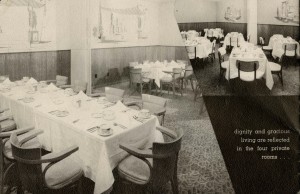 A cozy and very masculine men’s lounge (I guess the ladies didn’t need one): 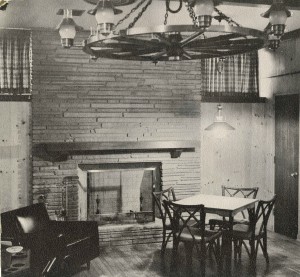 and a monstrous 288,000-gallon pool that easily claimed the title as the biggest in the city: 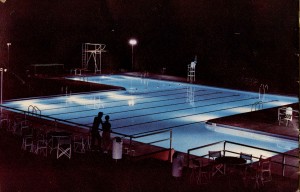 The Lake View Country Club in the heart of suburbia was certainly THE place to be when it opened, and owners advertised with pride that “nothing has been spared to make Oklahoma City’s newest club the ultimate in catering to your needs for relaxation, family gatherings, delightful cuisine, those never to be forgotten parties, or an afternoon tete-a-tete.”  Well, I don’t know how “delightful” the cuisine looks, but you’ve got to love that glass slipper ice sculpture: 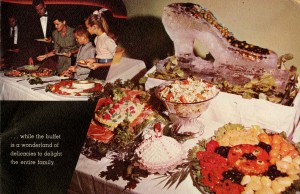 The club boomed during the (on the surface, anyway) halcyon days of Eisenhower-era peace and prosperity and hosted many a black-tie (and white-gloved) dance; lush, pastel-colored wedding; and poolside party with an abundance of bouffanted women and Brylcreemed men twisting the night away.

But, things began to change in the late ’60s.  Seemingly overnight, most of the Lake View’s members moved on to other, much larger clubs sprouting up north of Lake Hefner that offered golf, tennis, and other amenities that the space-constricted Lake View couldn’t match.  Ironically, the neighborhoods surrounding the club on all sides that once brought in so many new members now ensured the club’s demise.  When Harry James played there in 1972, it was the beautiful Lake View’s swan song, and the doors to the once-grand club closed soon after.  The building then housed a school for awhile but was demolished in 1981 and replaced with a bland office tower that is now owned by Chesapeake.