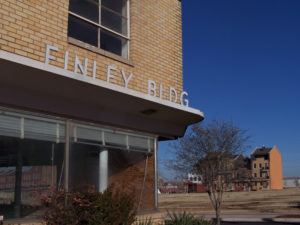 This mod beauty was located just at the edge of the Deep Deuce neighborhood. Dr. G.E. Finley, who was a prominent leader in the African-American community in OKC, constructed this modern building in 1952.  The building was home to his practice and contained small offices spaces for other medical professionals.

The building served the community for years until Dr. Finley retired in 1999, at which time it was boarded up.  Although it was listed on the 2009 OKC MCM survey as having architectural merit, the Finley Building was demolished in 2010, and the Aloft Hotel sits on the site.

As for Dr. Finley, he made such a mark in the Deep Deuce community that when the historic Walnut Avenue Bridge to Bricktown was restored and rededicated in 2006, it was renamed in his honor.

Where the Aloft sits on NE 2nd and Walnut in Ward 7 was once the Finley Building that saw many patients from the area.
Dr. Gravelly Eugene Finley was born in Batesville, Ark., but his family eventually sent him to further his education in Little Rock. After graduating from Gibbs High School in 1926, Finley attended Wilberforce University in Ohio. After graduating from Wilberforce, he went on to Ohio State University and later graduated from Meharry Medical School in Nashville, TN. Finley met Saretta Slaughter of OKC and the two married in 1935 in OKC shortly after he graduated from medical school. Although he rented an office in Columbus, Ohio, the retirement of his father in law, Dr. W.H. Slaughter, brought him to OKC in 1937. Finley began his practice at a time when black doctors were in high demand because most white doctors and other professionals refused to serve blacks. He opened his first office at 324 NE 2 in the Deep Deuce area. In 1951, he moved to a cream colored brick building at NE 2 and Walnut. The building was home to his practice and contained small offices spaces for other medical professionals. Dr. Finley made house calls in several residential areas such as West Town, an area north of Western near Klein, and Sandtown, an area off Robinson and NW 13. In addition to attending to his thriving practice, he processed black troops for the U.S. government by giving Selective Service physical exams for 20 years. Finley supported many community causes, including Central Oklahoma Habitat for Humanity. He gave them more than 14 lots. He also was a generous donor to Langston Univ.
Finley’s philanthropy extended to other areas. He and his wife went to Africa in 1966 and funded the construction of the Finley Clinic in what is now the Democratic Republic of the Congo. He opened a hospital in Africa in 1969 and conducted a medical mission trip in 1972 in Ethiopia. As for Dr. Finley, he made such a mark in the Deep Deuce community that when the historic Walnut Avenue Bridge to Bricktown was restored and rededicated in 2006, it was renamed in his honor. Dr. Finley passed away in 2008 at the age of 100. 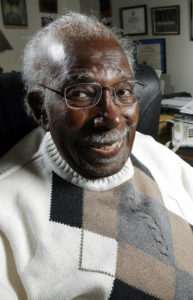 Here are a few more photos of the building taken in 2009, not long before it was demolished: 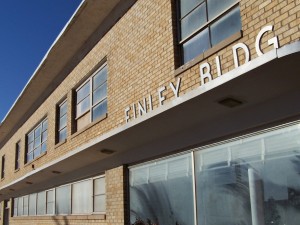 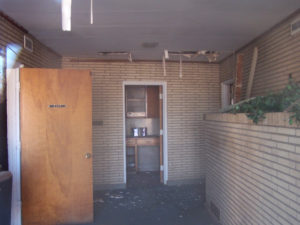 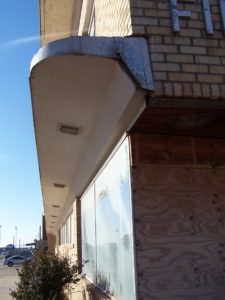 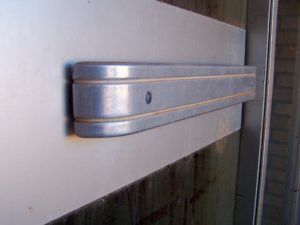