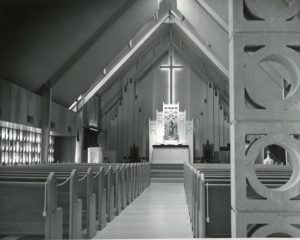 When the Evangelical and Reformed Church wanted to construct a very modern place of worship on land it owned at Northwest 40th and Classen in 1952, some of the surrounding neighbors vehemently protested due to original plat restrictions that barred commercial construction on the site.  The church pressed the issue, however, and the case received national attention when a District Court judge sided with the neighbors.  The first building of a proposed church/educational complex was finally constructed at a cost of $250,000 at Northwest 50th and Penn in 1953: 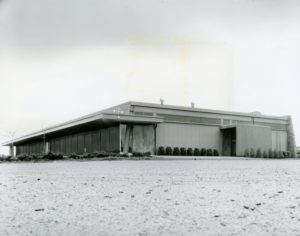 Here’s the model of what the entire complex would look like once it was completed: 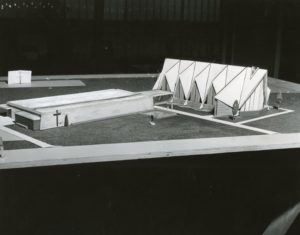 The A-frame sanctuary for the Evangelical and Reformed Church was constructed in 1960, minus its original folded-plate roof design that can be seen in the model.  Inside, the sanctuary featured concrete breeze blocks that let in plenty of natural, filtered light.

The entire complex was demolished in 1981 after the congregation merged with another church.  A bland office park was constructed on the site a few years later.