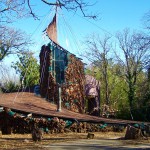 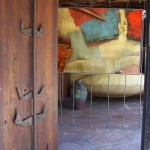 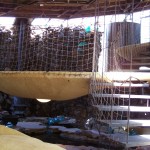 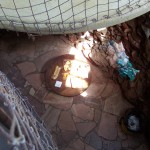 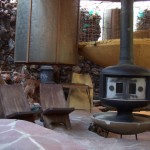 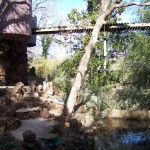 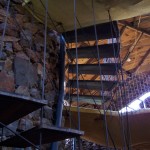 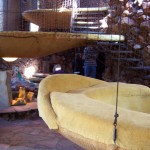 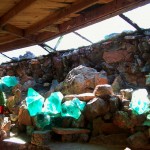 During famed architect Bruce Goff’s tenure as the head of OU’s School of Architecture in the late 40′s, he met a young art professor there named Eugene Bavinger.  Although Goff was 15 years Bavinger’s senior, the two men must have recognized in each other a shared spirit of adventure and non-conformity.  So, perhaps it’s no coincidence that they came together during the optimistic post-war boom years to create a structure that many would only loosely identify as a house but most would recognize as a true work of art.

Bavinger and his wife, Nancy, who was also a talented artist in her own right, wanted to break away from the typical box-like house they were living in; instead, they wanted a home that was open and flexible and had room for the Bavingers’ tropical plants and fish — and for their two small boys.  In addition, as creative souls, they wanted a house that embodied art itself.  So, let’s recap: no boxes; open; room for fish, plants, and kids; and artistic — all in one building — and all on an art professor’s meager budget.  Those requirements might prove to be more than daunting for less imaginative architects, but not for Goff.  After just one meeting with the Bavingers, he came up with the fundamental design for their new house — a spiraled DNA helix that rose three stories and contained not a wall one (well, okay, maybe one wall for the bathroom, but really, that’s the only one).

Instead of bedrooms, the Bavingers and their tots would sleep and live in UFO-like, carpet-covered pods suspended from the same cables that also held up the roof that grandly wound its way up 55′ to a tight spire on top.  All I can say is that Nancy Bavinger must have been a very brave woman to agree to such a set up with two rambunctious monkeys — I mean boys — crawling, jumping, swinging, climbing, and running everywhere.  Very brave, indeed (and I say that from exhaustive experience as a parent of  two such bizarre creatures of my own).

Once Goff completed his inspired design, Bavinger took up the helm and set out to build this most unusual residence.  Since he had very little money, he enlisted some of his and Goff’s most enthusiastic (or some might say crazy) students to drive to his wooded acreage, complete with babbling brook, during time off to labor on his dream.  They did, and very happily, too.  Using 200 tons of locally quarried rock, Goff’s signature aqua glass cullets, used oil rigging equipment and parts, WWI stainless steel aircraft struts, and any other leftovers they could scrounge, the students and Bavinger toiled on weekends and holidays through the frigid cold of Oklahoma winters and the sweltering heat of Oklahoma summers.

Word soon spread that a very strange structure was being built on the prairie outside of town, and people began arriving by the busload to check it out.  Soon, so many tourists were coming that the industrious Bavingers began charging admission — $1 per person.  Within a short amount of time, the struggling family had earned thousands of dollars from the curious, and oftentimes dumbfounded, spectators.

After five long years, the home was finally completed in 1955.

A masterful blend of organic and modern design, the house was everything the Bavingers hoped it would be.  The natural stone walls that literally arose from the red earth itself contained shelves and planters for Eugene Bavinger’s beloved tropical plants, while a pond snaked through the bottom level, providing a home for his fish (and I’m sure some lively swimming and perhaps a little fishing for the small Bavinger boys).

A modern kitchen and dining area also made up the first level of the home.  The home’s backbone, a spiral staircase, allowed access to the living room and bedroom pods (complete with fishnetting to prevent the little ones from toppling out), as well as Eugene’s clerestory studio on the uppermost level.

Soon after the family moved in, the press came a-calling.  The most archetypically American periodical of the day, Life Magazine, published a profusely illustrated, two-page spread on what it dubbed the “space and saucer house.” Various architectural magazines also profiled what was quickly becoming referred to as Goff’s masterpiece, but the glory was soon overshadowed by his abrupt move from OU to Bartlesville in 1956.

Even though he was gone, Goff and Bavinger’s jaw-dropping, crazy dream continued to bewilder, baffle, and even bemuse as the Bavinger boys grew up and Gene and Nancy grew older.  In 1987, the home was awarded the prestigious Twenty Five Year award by the American Institute of Architects, and it was placed on the National Register in 2001, four years after Gene’s death.  Nancy followed her husband soon after the designation.

By the late 2000′s, the aging Bavinger House was in serious need of restoration.  The skylights that spiraled up along with the roof leaked, some of the cabling needed repair, the pods were in sad shape, and the wood and shingles were rotting.

Gene and Nancy’s youngest son, Bob, once again opened the house for tours to raise awareness and funds for the restoration effort, but, as often happens, the money didn’t pour in as he must have hoped, especially from organizations that were also concerned with preserving the home.  Over time, tempers flared, and the situation grew more and more bleak for Oklahoma’s most unique residence.

In 2011, Bob Bavinger contacted a member of one of the organizations he’s been feuding with and claimed that he tore the house down “to the ground.”  He also made the same claim to numerous people who subsequently called to verify his claim.  Later, however, he amended his story about deliberately tearing down the house and claimed that a strong storm and wind gust broke a cable on the house, toppling the spire.  Whatever happened, Bob began selling off his parents’ legacy one precious piece at a time (the front door and a hanging lamp were bought and went up for auction in March 2012), and who knows how much of the house is left (the Bavingers certainly aren’t saying).

UPDATE: In July 2015, the Bavingers announced that the house, or what’s left of it, is for sale for $1.5 million — more details here.

UPDATE: The home was completely demolished by its owners in April 2016 and all of the stone and glass cullets were hauled off to various dumps.  There is nothing left of Bruce Goff’s most unusual creation and one of Oklahoma’s best pieces of architecture.