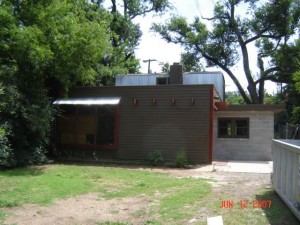 This modest mod in the heart of historic Putnam Heights is quite unique in that it was built just before the United States entered WWII and several years before Modernism found a foothold in Oklahoma.

The home’s original owner was Fenton Wheeler. While he had a day job (as a mailman for nine years then a shipping clerk at American Iron and Machine Works), Wheeler was also an artist and exhibited many times in OKC. He was a member of several artists groups and helped found the Association of Oklahoma Artists, and he was also a member of the Oklahoma Anthropological Society.  Since he was obviously a creative type, he may have designed the house himself.

Fenton Wheeler was also involved in labor activity during the years he lived in this house and was even arrested in 1945 for fraternizing with African Americans.  Here’s an Oklahoman article that describes the circumstances surrounding his arrest:

Unless it is a law violation for whites to associate with Negroes in a public place, the city Tuesday must dismiss its case against 12 defendants booked on disorderly conduct Saturday night after police raided their meeting at a Negro barbecue stand at 417 N Stiles.The group of Oklahoma City and Tulsa labor union members, headed by Alan Shaw, former secretary of the state Communist Political association, appeared in police court Monday afternoon before Mike Foster, judge who passed their case until Tuesday pending an opinion from the city attorney’s office.“We were discussing our mutual problems,” Mary Leila Caspin, discharged Douglas worker of 834 NE 2, CIO member and one of the two white women arrested, told Judge Foster. Walt Turner, one of the six plain clothesmen who made the arrests, admitted there was no evidence of drinking, loud talking, or any irregularity other than the mixing of the two races.Questioned by their attorney, Ed Hall, the defendants said they had attended a public meeting at the Negro USO, 300 N Stiles, and had gone on to the barbecue stand to eat and continue their conversation. Ted Rutherford Haynes, Negro owner of the stand, also was arrested and forfeited a $20 bond when he failed to appear in court Monday.Tulsa Case DiscussedPurpose of the meeting, according to the defendants, was to circulate a petition favoring fair employment practices legislation and to take action in the case of LeRoy Benton, Negro, up for trial in Tulsa for the rape-slaying of a young white girl. The delegation from Tulsa seeking assistance in the defense of Benton, who last summer confessed to the killing, consisted of Ralph Timothy Foley and Glen Emmerson Stelle. Sand Springs, and the four Negroes. The Negroes said they represented Amos Hall, Benton’s attorney, and the National Association for the Advancement of the Colored Race. “This was a case in which we felt justice was not being done,” Shaw explained.Statements DisputedShaw, whose sentence to 10 years in prison on a criminal syndicalism charge was reversed by the criminal court of appeals in 1943, charged the arresting officer used obscene language and made references to the morality of the two women, “I’d like to know what the police officers said to offend Mr. Alan Shaw?” Turner asked. “I have no direct knowledge of the statements.” Shaw admitted.Others held are; Joseph Fenton Wheeler, 3808 Putnam Heights: William Hampton Hill, 426 NE 6; Ray Erick Boydston, 1401 NW 16, and Elsie Rosie Byrom, 130 NE 9, whites; and Joe Ed Carr, Herbert Lee White, Lee Verner, and James Arthur Compton, Tulsa Negroes.

No word on the outcome of the case.  Fenton Wheeler lived in his modern abode with his very modern (for the times) convictions for several years — at least until the early ’50s when he married for a second time.  In the years that followed, other families moved in and out and by the time these County Tax Assessor photos were taken in 2003 and 2005 respectively, the home was looking very tired: 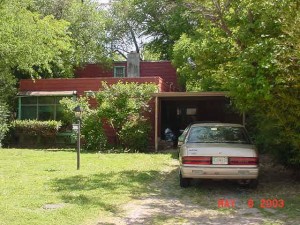 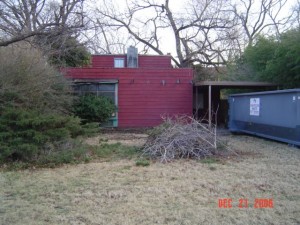 The current owner, who is also an artist like Fenton Wheeler, says that a fire caused significant damage to the house, which culminated in its being remodeled and updated in 2008.

The house retains many original elements and continues to look refreshingly modern over 70 years after it was built.