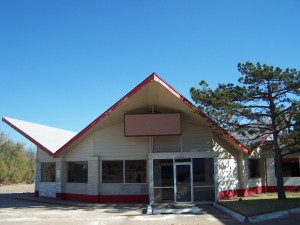 The former Trucker’s Village was once the largest gas station in the world, or so opening day ads boasted.  Covering five acres and containing 57 pumps, a 100-seat restaurant that was open 24-7, sleeping accommodations for weary drivers, and a truckers’ lounge, this Derby gas station called two very modern, hyperbolic paraboloid buildings home: 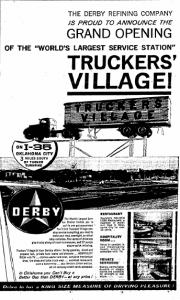 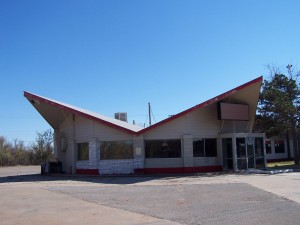 For years, the Golden Lion occupied the restaurant space — it was formerly located near the State Capitol but closed in 1961 to make way for the government buildings to the north.  At some point, the gas station became a Conoco and remained in operation until the early 2000s, when Truckers’ Village closed for good.  The buildings remained vacant for a couple of years until Stone & Stucco moved in and did a great job of Tuscanizing these mid-century structures.  Ugh!