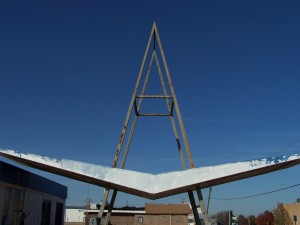 Originally built as a Stiles Champlin gas station and Kitchen’s Corner store, Sunoco later took ownership until the gas station finally closed in the 80’s or early 90’s.  The site remained abandoned until 2011, when a new gas station and convenience store opened.  Many waited with bated breath, wondering what would happen to the glorious Googie awning as the new owners spruced up the property … and breathed a deep sigh of relief when they learned it would remain in place and be well cared for.