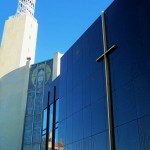 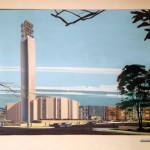 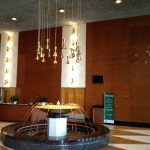 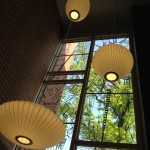 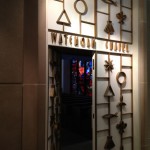 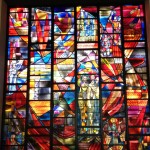 St. Luke’s is perhaps Oklahoma City’s grandest mid-century modern church.  Designed by local architect, Truett Coston (of Coston, Frankfurt & Short), this church is a masterful piece of art and architecture.  St. Luke’s and the First Christian Church (a.k.a. The Egg Church) were built at the same time in 1956.  Both congregations numbered in the thousands and counted many prominent OKC citizens as members, but because they already owned the land and had built the Education building, St. Luke’s had a much bigger budget to work with in constructing their sanctuary.  (The St. Luke’s church alone cost $1.7 million to build, while all three buildings — sanctuary, education, theater — at First Christian Church cost $1.1 million.)

With all that extra money on hand, Coston spared no expense and customized every detail of the church, from the exterior Norwegian Blue granite where the name of the church appears in gold leaf to the three interlocking brass circles (called a triquetra) that make up the door handles, to the shellstone walls in the 1,800-seat sanctuary that are reminiscent of the fisherman who were the first apostles, to the 185-foot bell tower with a carillon of 42 bells.  As for the 40-foot-tall stained glass windows that appear on both the north and south sides of the church, artist Robert Harmon captured various Biblical characters in magnificent modern detail.  Also, because one of St. Luke’s parishioners was confined to a wheelchair and found it difficult to maneuver around the church, Coston became a real pioneer when he made the building handicapped accessible.

After it was constructed, St. Luke’s was captured on film by none other than the great Julius Shulman, who said that it is one of the best buildings he ever photographed.  In fact, Shulman was so impressed with the building that he included a full-page interior shot of the sanctuary in one of his gorgeous Modernism Rediscovered books.

Shulman often stayed at Coston’s beautiful home and farm when he’d come to Oklahoma on his semi-annual visits.  Coston, who was quite a Renaissance man, was a painter, pilot (he had Bonanza plane with a V tail, according to Shulman), self-styled philosopher and humorist, conservationist, and naturalist, in addition to being an architect.  On his farm in far NW OKC, Coston raised prized cows.  Once, when Shulman was staying with the family, Coston’s young daughter ran, out of breath, into the kitchen where the two men were having breakfast.  She excitedly told Shulman and Coston that one of the cows had just had a calf.  Then, she sat down next to Shulman, who was always her favorite house guest, and told him that she wanted to name the little guy Julius, in his honor.  This pleased Mr. Shulman very much, so much so that he vividly remembered the event over 50 years later.

Coston and his firm designed many of OKC’s best mid-century buildings, but Coston left Oklahoma in 1964 and moved to Pennsylvania to work on projects for Bethlehem Steel.  He returned to Oklahoma often but never lived here again.  He died at the age of 89 in 1999, but the firm he created (now named Frankfurt, Short, Bruza) is still going strong today.

As for St. Luke’s, the church is little changed and is as remarkable today as it was when it first opened in 1956.  In 2007, St. Luke’s was named among Central OK’s 100 best buildings by that chapter of the AIA.

Go to the Mod Blog to learn more about this amazing building.