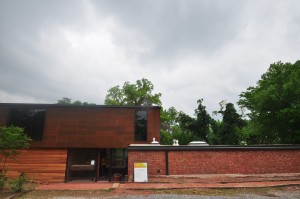 After he graduated from OSU, George Seminoff bought a piece of land from a relative that was way out in the country (in those days).  Since he was a bachelor and didn’t need a lot of room, he designed a small, rectangular Miesian box with an open floor plan that had windows lining the entire back wall.  The house was small — living/dining area, kitchen, bathroom, and bedroom (which was open to the rest of the space).  That’s all he needed (and all he could afford at the time since he was just beginning his career).

Several years later, George met Sharon, and they married and lived happily in the small house.  Early in the marriage, given the choice to expand the house or build a pool, Sharon opted to build a pool — one that was almost as large as their abode!  Then they decided to have kids, and there was no option but to expand the home.  George added on a bedroom wing to the house that provided ample space for their growing family.  He later added a master bedroom suite that completed the now 3,600 sf house.  Once the last phase of the house was completed, it received an architectural merit award by the OK chapter of the AIA in 1970 and was featured (with photos by Julius Shulman) in the Spring 1971 issue of Living Now.

Shulman later told this story about photographing Seminoff’s home.  The two men were outside setting up a shot when they heard on Seminoff’s VW Beatle radio that a tornado was heading their way.  The sky became dramatic and dark, Oklahoma style, and the wind began swirling and gusting all around them, but, dogged as they were, the two men defied the elements and continued to set up their equipment.  As if to bow to their strong wills, the tornado changed directions at the last minute and bypassed them completely, and Shulman got the shot he wanted.  During Shulman’s last visit to OKC in 2008, the two men met for the first time in 40 years and shared many stories and a lot of laughs about their shared misadventures.

As for the house, the Seminoffs moved to Dallas in 2010, and the home was sold to a new owner, who contracted with Fitzsimmons Architects to remodel the place.  The firm preserved the best parts of the home (and even kept the tree that had been growing inside the living room for decades), and it was one of the highlights of the 2012 AIA architectural tour.