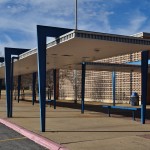 A lot of concrete block and Googie-style steel beams set this school apart from other, more blandly designed learning institutions in the city.

This school replaced the old Roosevelt Junior High that was located on N. Klein St., an inner city school that was closed due to dwindling enrollment as the masses moved to the ‘burbs. The old school was converted into an administration building for the OKCISD, and it’s still used in that capacity today.

Hudgins-Thompson-Ball (HTB) designed quite a few schools and state buildings from the 50’s onward. In fact, I’ve heard from several architects of the day that after HTB got their foot in the door, it was difficult for other firms to get almost any kind of state-funded work without HTB also being involved.

Whatever the story is, the innovative design of Roosevelt Jr. High, which made it on the 2009 OKC MCM survey, looks as fresh and modern today as it did when it was built 50 years ago. 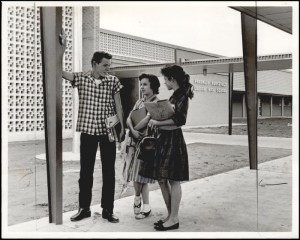