With its shimmering gold dome, the iconic Nuway Cleaners building on the I-35 service road has been a Metro landmark since it was constructed in the early ’60s. The original round building was topped with a smaller and louvered cousin of the Citizens Bank dome and anchored by an easy-to-spot, towering sign spelling “Nuway” in giant black letters. Here’s the only photo I could find of this building from an article in the Oklahoman: 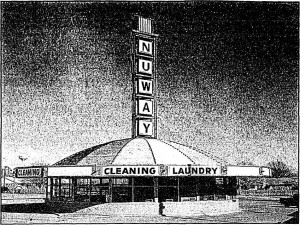 In 1999, ODOT informed Nuway’s owners that the cleaners would have to be demolished by May 3rd of that year to expand I-35.  Although they were very attached to the little round building, they knew they had no choice but to comply.  They decided to save as much of their beloved laundry and had the aluminum gold dome painstakingly dismantled and stored until they could construct the new building.

Ten days later, the monster May 3rd tornado raged through Moore, destroying everything in its path, including the already doomed Nuway Cleaners building.  As owner Mindy Denham later told the Oklahoman, “I get chills every time I think about it.  We didn’t know if we would be able to get the building out of the way and torn down in time (ODOT’s deadline).  The state was planning on their project being a way ahead of where they are now.  We were going to lose that building May 3rd either one way or another.”

So, in an interesting twist of fate, if the building hadn’t been slated for demolition, the roof never would have been saved and we wouldn’t be driving by it today.

In 2001, the new Nuway Cleaners opened just 50′ east of the original building.  No longer round, the new, now-square structure still paid homage to the original by being comprised mostly of glass and topped, of course, by the dome. 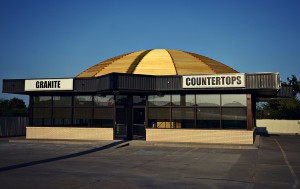 The celebration didn’t last long, however, and Nuway closed for good around 2005.  Granite City soon took up residence and remained until 2015, when the building was up for lease and looking for a new caretaker.