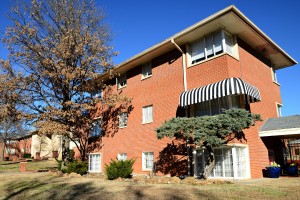 With the post-war housing boom in full swing, the area around NW 50th and May was dubbed Mayfair in the late ’40s and quickly filled with houses, shops, and an apartment complex that acted as a buffer between the two.  Mayfair Gardens’ low, ranch-style lines meandered for three long blocks on N. Steanson and packed a big wow with bright and airy rooms, wrap-around casement windows, and plenty of green space surrounding the buildings that enhanced the decidedly suburban feel of this sprawling complex.  The 111-unit complex offered 1- and 2-bedroom floorplans for singles, couples, and families. Developed by father and son, C.B. and Gene Warr, who later built Warr Acres and other residential areas in the Metro, and their partner Clark Pace, Mayfair Gardens is now nearly 70 years old but looks as fresh and modern as it did the day it greeted its first tenants.

(The architect and developers teamed to design and build The Madison apartment building near the State Capitol around the same time — check out that building here.) 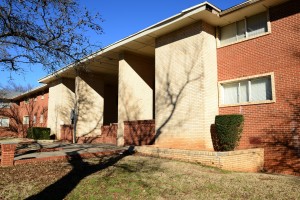 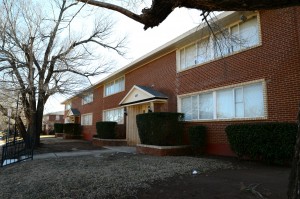