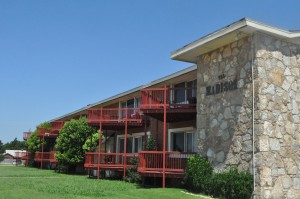 When it was built in 1947, The Madison was a big departure from the standard, boxy walk-up apartment buildings OKC had seen before the war.  Low, long, and lean, the 23-unit Madison was more suburban than urban and boasted such amenities as individual entries, lots of windows, and private patios — a first for a complex in the Metro.  Built for $90,000, the complex contained all 1-bedroom units just blocks from the State Capitol and the bustling NW 23rd corridor, which made it a popular place to call home.  Today, the Madison still looks great and very modern, thanks to architect William Caudill, who designed it and its sister complex Mayfair Gardens around the same time.  Soon after he created The Madison, Caudill would found Caudill, Rowlett & Scott, revolutionize school design, and become an internationally known architect.