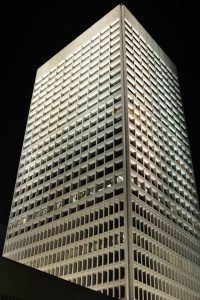 The 30-story Kerr-McGee Tower was designed by Pietro Belluschi with Frankfurt, Short, Emery & McKinley and opened in 1972.  The building’s most interesting features are the windows that vary in size as the structure soars to the sky.  Over the years, the tower has received numerous awards, including the “25 Year Award of Excellence” from the Oklahoma AIA.  SandRidge Energy purchased the building in 2007 and extensively renovated the entire campus.