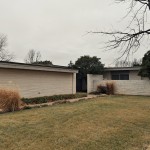 To show off all the latest in technology and design at the 1964 New York World’s Fair, three architects were chosen to design three very different styles of homes — traditional, contemporary, and modern.  Internationally renowned architect, Edward Durrell Stone took on the task of designing the modern entry and came up with an “inward” design that allowed for homes to be built close together without losing any privacy.  The design was so popular that Stone sold plans for $1,000 to people interested in having their own House of Good Taste.

And that’s just what the owner of OKC’s Homes of Prestige, Stanley Brown, did.

As one of the developers of what would become known as The Greens neighborhood in NW OKC, Brown wanted to create an entirely new type of suburban living experience, with homes clustered around small, private parks that allowed for a true sense of community without all of the costs associated with pricey club memberships.  The House of Good Taste plan fit in perfectly with this new concept, and the home was built in time for the 1964 Parade of Homes tour.  It was the most popular home on the tour that year and remains a stunner to this day.

For a more detailed history of the House of Good Taste, go to this entry on the Mod Blog.

The home was also featured on the 2015 AIA Tour — more on the tour on this Mod Blog post.