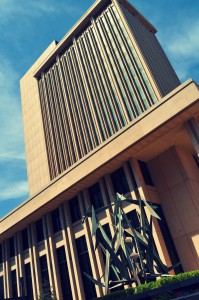 The 16-story Fidelity Bank Building opened in 1971 as the lending institution’s new headquarters.  The top two stories of the building housed the posh, members-only Whitehall Club, where participants had to ante up a $400 enrollment fee and pay $25 in monthly dues.  In 1983, Fidelity merged with the Tulsa-based Bank of Oklahoma, with the latter maintaining the name.