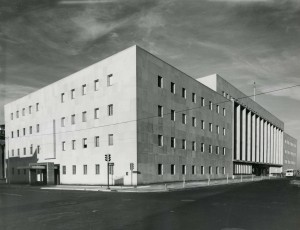 When it became apparent that the courts had outgrown the majestic 1912 County Courthouse and Post Office, Judge Alfred P. Murrah spearheaded efforts to construct a larger building across the street. Enid architect Dow Gumerson’s modern design for the new building complimented the original in scale but was devoid of unnecessary ornamentation except for two bas-relief sculptures on the east and west exterior walls where the side entrances were located. The $7 million building was completed in 1961, but many citizens balked at sculptor, Bernard Emerson Frazier’s original nude designs for the exterior artwork. It took another six years for Frazier’s revised and now-clothed sculptures to finally be installed. 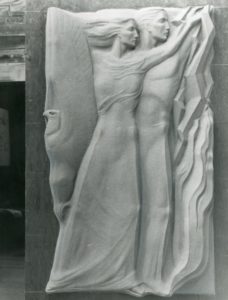 The building was renamed the William J. Holloway U.S. Courthouse in 2016.