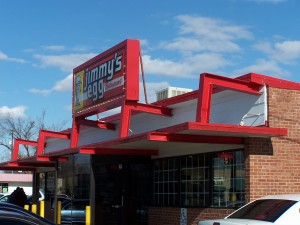 In 1955, Beverly Osborne announced plans to expand his Beverly’s chain by building 15 new, “ultra modern” restaurants, each measuring 30 by 56 feet.  The first to be constructed was this one at NW 16th and May, and Osborne planned to add four additional stores in OKC and spread the other 10 throughout the Enid, Ada, Shawnee, Duncan, and El Reno areas, with a total cost of $800,000.

Although several were built (including one in a slightly different style on NW 23rd just west of Classen that was later sacrificed to save the Gold Dome), I don’t believe that all 15 were constructed, and now just one Beverly’s, housed in the old Hilander Bowling Palace at NW Expressway and Independence, remains.

For more history about the iconic Beverly’s chain, go here.