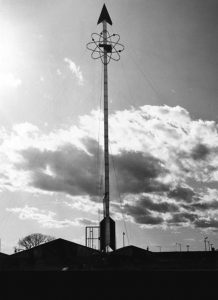 As a part of the 1957 Oklahoma Semi Centennial celebration, the magnificent “Arrows to Atoms” sculpture was erected at the fairgrounds. The giant 190 foot tall arrow was made of steel covered with corrugated fiberglass. Oklahoma Today said in the May-June 1957 issue:

“Hallmark of the Exposition is a towering arrow-shaped structure, reaching 200 feet into the sky, where it pierces a silhouetted map of Oklahoma and an orbit of golden atoms.

The flashy new tower, now a permanent feature of the modernized fairgrounds, was dedicated to the boom of cannon and the thunder of hoofbeats April 22 {1957} in a spectacular ceremony that prevued the upcoming Exposition.” 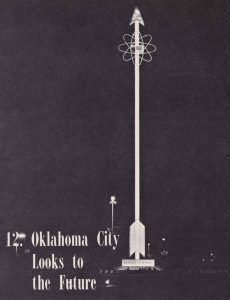 A 1989 article in the Daily Oklahoman said that the towering structure was removed in 1967 because state engineers said that it was “deteriorating and in danger of falling in a high wind.”

The Utility Tower Company that originally erected the arrow was contracted to remove it and the owner wanted to keep it. The “interwoven ellipses representing electron paths and a cutout of the state of Oklahoma” were removed and the arrow was shortened to about 80 feet and installed on property SW of Mustang where it still stands in overgrown foliage. 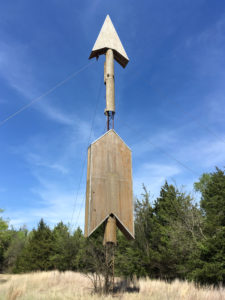 This treasure deserves to be in a museum!! 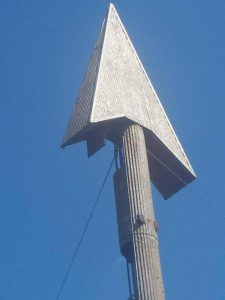 (Thank you to Squadder Jim Jordan, who contributed the close up photo and text for this entry.)