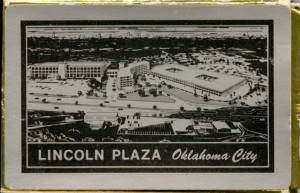 The 24-acre Lincoln Plaza was developed in two stages beginning in 1967 by John Lewis, president of First Fidelity Corporation.  Eager to revitalize the increasingly seedy Lincoln Boulevard, Lewis believed that the complex would breathe new life into the area with its trademart, hotel (complete with dinner theater), and office complex.  He hired Halley-Riek to design the complex.  Although the trademart was never built, the rest of the complex opened to great fanfare in 1969, with Hertz and Wilson Company as anchor tenants in the office building.  Boasting the most modern amenities in town (which wasn’t saying much when so many of downtown’s hotels were coming down as part of Urban Renewal), the hotel quickly filled up with tourists (including Elvis Presley), and its meeting rooms and restaurant became a second home to many local politicians and businessmen.

By the 1990s, however, the hotel looked tired and worn, along with the rest of the complex, and it began to trade hands with alarming frequency.  While parts of the aging complex are still occupied, the hotel and most of the offices are closed and awaiting a return to their former glory.  In 2011, Dick Tanenbaum bought the beleaguered Lincoln Plaza for $2.6 million and announced “grand plans” for complex, but it still sits awaiting its rebirth. 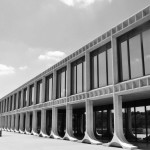