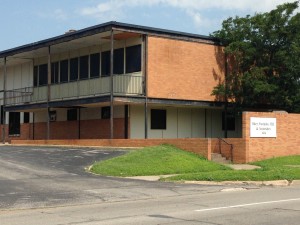 This building was designed just a year after next door neighbor, the Bettes Building, opened for business.  Designed by the same firm, Caudill Rowlett & Scott, the Landmark Building nicely compliments its flashier sister across the parking lot while being quite distinctive itself.  Originally called the Tekoil Building after its first anchor tenant, the Dallas-based Tekoil Company, the structure was home to many a small business over the years, but it has fallen into a state of disrepair and is pretty much vacant these days.  Rumors are swirling that this and possibly even the Bettes Building may be demolished and replaced sometime in the near future.