by Lynne Rostochil.  Vintage photos from the Oklahoma History Center and the Vanished Splendor books.  Menu and newer images from Lynne’s collection.

At the same sale where I found the KWTV programming schedule I shared with you a couple of weeks ago, I found a cute kids’ menu from the famed and long-gone Glen’s Hik’ry Inn, located at 2815 NW 10th.  Have a look: 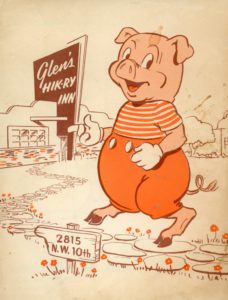 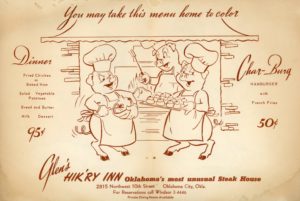 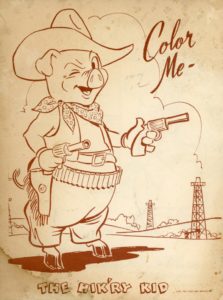 Too stinkin’ cute, isn’t it?

Glen Eaves began his career as a butcher, but he had an entrepreneurial spirit and wanted to do more than just cut meat all day.  So, in 1948, Glen and his wife, Alleen opened a tiny restaurant, Glen’s Hik’ry Pit, on NW 10th and served up heaping portions of their delectable barbecue to nearby merchants and workers.  As a capper, the restaurant featured an unusual rotating sign depicting a cow chasing its tail. 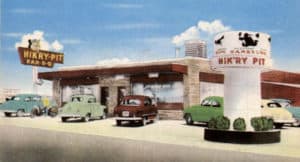 The business did so well that the couple took a giant leap of faith and opened a more upscale steakhouse, Glen’s Hik’ry Inn, across the street in April 1953. 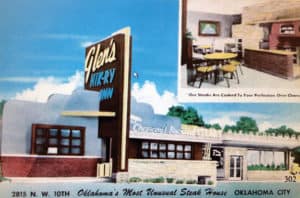 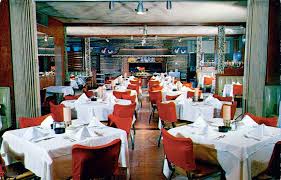 With its fashionable decor and grand smorgasbord packed full with salads, meats, and the like, Glen’s Hik’ry Inn became an instant hit and was soon one of the most popular eateries in town.  Here are a few photos from the mid 1950s of the stylish interior and of a VERY tall guy who seems thrilled to partake of all of the goodies the smorgasbord had to offer: 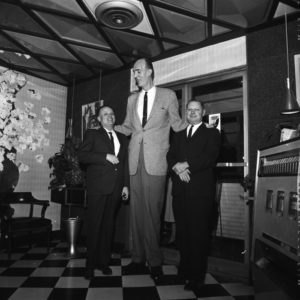 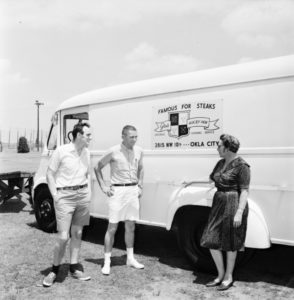 … including this 1966 Western Electric picnic: 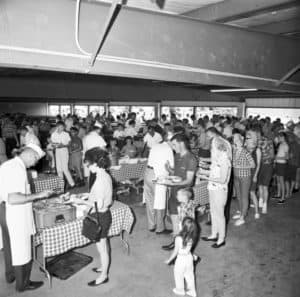 Life was good and by the 1970s, the two Glen’s operations were well established and raking in $2 million a year in sales.  Around the same time, one restaurant association survey listed Glen’s as #80 on a list of the top 500 independently owned restaurants in America.  Not too shabby.

Sadly, Glen died at the relatively young age of 64 just a few years later in 1980, and his landmark restaurants were never the same again.  Although she tried to keep the businesses running, Alleen didn’t have Glen’s business acumen and both eateries closed amid financial difficulties in November 1985. While the Hik’ry Inn remained vacant, two local caterers bought Glen’s Hik’ry Pit (and many of Glen’s original recipes) and ran it for several decades.

Meanwhile, the once-elegant Hik’ry Inn continued to languish like the rest of post-oil-bust Oklahoma, and there was no savior in sight.  A small fire in December 1987 foreshadowed even worse news to come.  On Christmas day 1989, an arsonist burned Glen’s Hik’ry Inn to the ground. Inside, a body was found burned beyond recognition — probably that of a squatter or perhaps the arsonist himself. The authorities believed that he was Native American, stood 5’5″ tall, and weighed 200 pounds.  In an attempt to identify him, police had composite drawings made of him that were published in the Oklahoman and other papers, but no one ever came forward to claim the man who went down with Glen’s Hik’ry Inn.  Such a sad ending to one of the metro’s most beloved eateries. 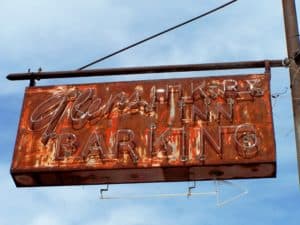 It was removed when a new strip center was constructed there about five years ago.  As for Glen’s Hik’ry Pit, it remained in at least sporadic business until the 2000s: 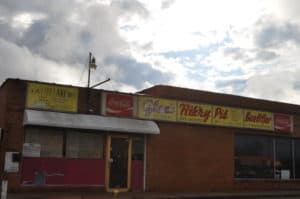 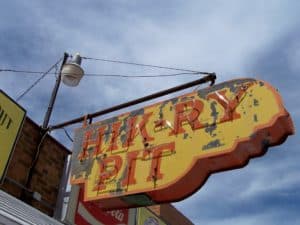 Long after it closed, the sign was sold to a private collector in 2010 … 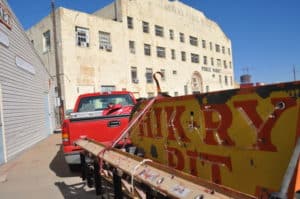 The quote about the Inn’s decor from the Oklahoman.

On the Market: A Storybook Dream in Quail Creek Why It’s Important to Landmark the First Christian Church and Other Metro Buildings
Click here to go back to previous page