Tickets sold out very quickly for the Mod Squad’s first-ever Mod Home Tour during the Oklahoma Modernism Weekend, and we were very sad to have to turn away so many people who wanted to join in on the fun.  If you missed this very fun tour, I took about a million photos of our incredible stops to share with you here on the Mod Blog so you’ll feel like you were there, too.  Our first stop was in the Edgemere Heights neighborhood just around the corner from the First Christian Church.

The neighborhood developed after World War II when the Edgemere Country Club closed and OKC Golf and Country Club expanded.  It was advertised as “restricted to protect your investment” and was the last neighborhood to be developed in such close proximity to downtown.  Although sales began to be advertised in 1946 — the least expensive lot went for $6,500 (about $65,000 today) — lots didn’t sell right away.  The first home built at 317 NW 41st didn’t go up until 1948 and cost $24,000 to build — that’s about $238,000 today.  Some of the architects who designed homes in this neighborhood include Norman Berlowitz, Bill Howard, Robert Roloff, William Stanley Burgett, and CE Duffner

One of Duffner’s designs was for the truly fabulous McQuistion House: 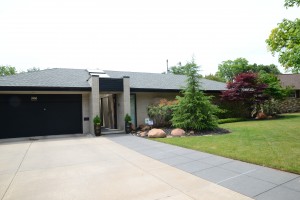 Designed by local developer C.E. Duffner and built in 1962, the modestly appointed exterior of the McQuistion House in gorgeous Edgemere Heights completely belies all of the mid-century goodness within, including an unusual interior courtyard, where we met owner Cristina McQuistion, who gave us a little history about her gorgeous home (her husband, George, was also on hand to show us around the interior spaces): 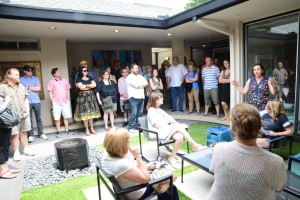 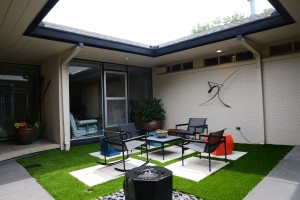 Inside, tour goers were greeted by a stunning glassed-in atrium overlooking the ample living room: 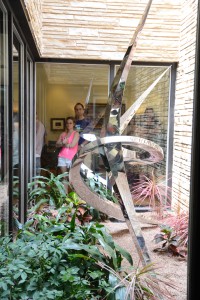 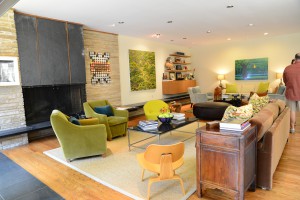 Another big treat at the McQuistion House was getting to see a model of the dearly departed Stage Center, which a local family commissioned then donated to the Oklahoma City Foundation for Architecture.  They very generously loaned it to the Mod Squad for the tour.  And what a model it is, too! 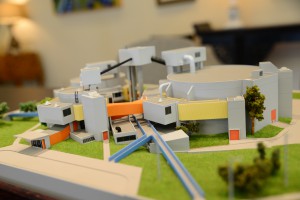 Finally, the McQuistions invited the original owners’ granddaughter to stop by and chat with us about the history of the house.  She also brought along original landscape plans for the home and an Oklahoman article devoted to the decor of the house soon after it was built: 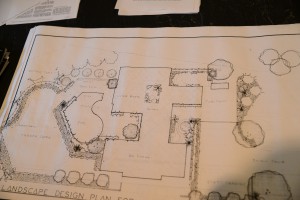 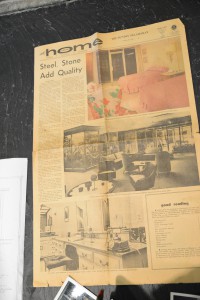 From the McQuistions, we drove just around the corner to a house that I think most of us had been dying to see for years, the very private Ontko House. 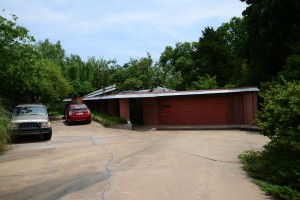 The home was designed by William Stanley Burgett, who was a professor with Bruce Goff at OU and also designed one of the most iconic buildings on campus, the jaw dropping Burton Hall.  In addition, he was the creative mind behind this unusual, Usonian style house, which, unlike most homes that face the street, is tucked deep into the lot away from view to allow for complete privacy.  A protective breezeway guides guests to the front door: 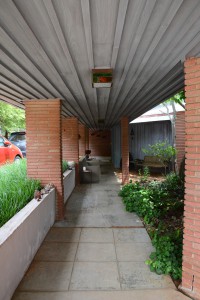 A low-ceilinged entry soon opens to a spacious, two story living room with large windows that provide expansive views of the wooded backyard: 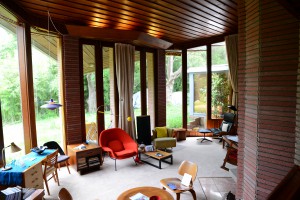 All of the openness and natural light make this 2,200 sf gem appear much larger than it really is and gives the home a true zen-like quality. 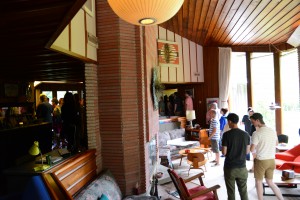 Owners Andy and Kathy Ontko also shared plans of the home, which was constructed in 1952 for Dr. McKee and his family: 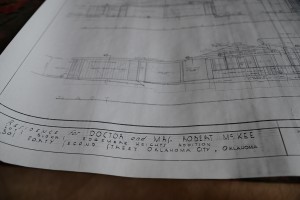 Andy’s family bought the home from the McKees in 1966 and Andy purchased it from his parents’ estate after their deaths several years ago.  This well preserved delight is mostly original and very much loved by its owners.  What a treat it was to get to see it!

Next up is one of my very favorite homes in all of OKC, the fun and funky West House: 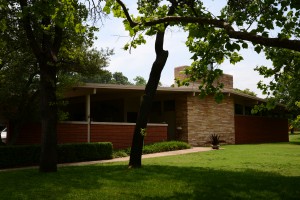 The home is located in Thompsons Woodland, a neighborhood divided into one acre lots to provide a little country living in the middle of the city.  Lots in the neighborhood opened in 1930 but not much happened due to the Depression then World War II.  After the war, development plans began anew in the restricted neighborhood, and advertising and sales kicked off beginning in 1947.  One acre lots sold for $1,500 per acre, which is about $16,000 now, but building didn’t really get underway until the early 1950s.

This lovely home was originally designed for Dr. Louis J. West, who was Chief of Psychiatry at OU Medical School in the ‘50s, and it also has a Hollywood connection: West’s old college roommate, actor Charlton Heston, always preferred to stay at his best friend’s house whenever he visited Oklahoma City.

The Trippes bought the home several years ago and filled it with all kinds of fun.  This is a house where you want to stop and sit a spell and just take everything in and be happy: 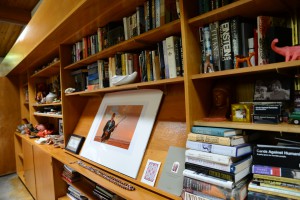 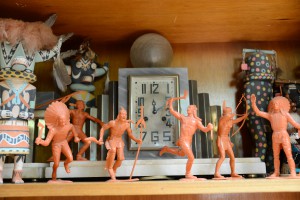 The living/dining room are highlighted with clerestory windows that let in a ton of light while maintaining privacy: 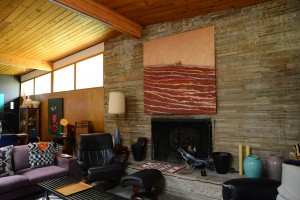 Oh, and the Trippe kitchen/hang out room is one of my favorites — I’ve had dreams about this space, I love it so much! 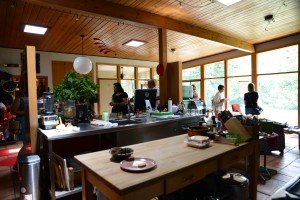 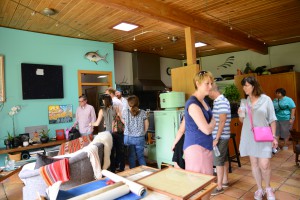 What a big open happy space!  Another bonus was getting to see original plans and a drawing of this stunning residence, which was designed by Jones & Andrews and built in 1957: 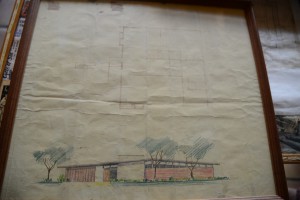 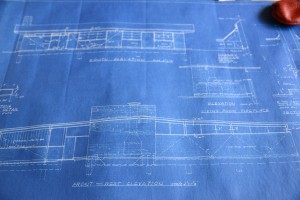 And that’s it for now.  Next time, we will conclude the tour with a look at two newly constructed modern homes and two mid-century modern gems that are complete perfection.