Highlights from the 2016 AIA Tour

Spring wouldn’t be the thrilling season it is without torrential thunderstorms, crazy allergies, and two much more fun occurrences, the Festival of the Arts and the always exciting AIA Tour.  I think I say it every year but this time I really mean it when I gush that this was the best one yet … and the highest attended tour of all time!

The tour began at the Krogstad House, which also will soon be the place I’ll be very lucky to call home.  I’ll be writing a lot more about my family’s adventures bringing this long-vacant home back to life in another blog, but here are a couple of photos of this one-of-a-kind organic modern home designed by Bruce Goff student, Robert Reed, and with the beautiful addition designed by Ken Fitzsimmons of TASK Design: 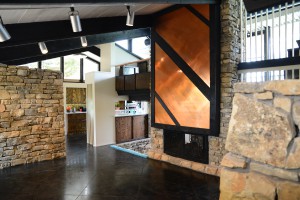 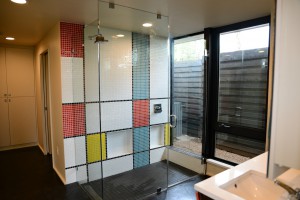 The second stop was the Quonset hut-styled American Energy Partners Fitness Center designed by Allford Hall Monaghan Morris and built on the site of Aubrey McClendon’s dream for a monstrous wine cellar. 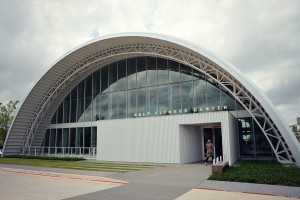 The state-of-the-art center surely provides the most beautiful backdrop in all of OKC for a game of basketball: 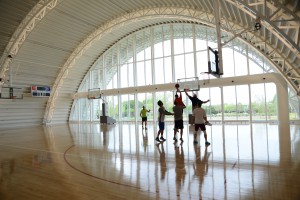 The lounge area isn’t too shabby, either: 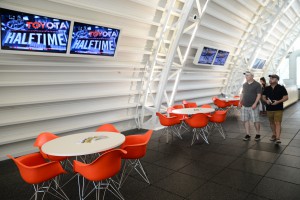 Even the locker rooms get the VIP treatment with private showers: 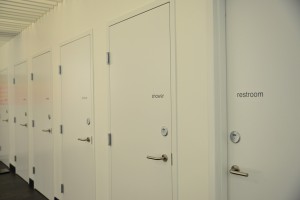 From AEP, we ventured to two David Wanzer/405 Architecture/Geoff Parker designs in the the new urban neighborhood of Meadowlark Acres next to Brookhaven, the grandly appointed 2×2… 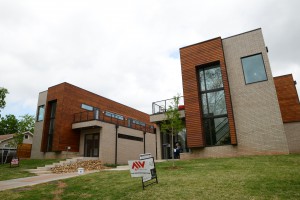 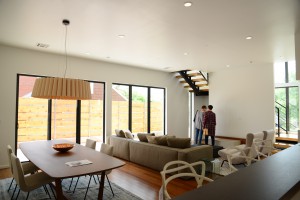 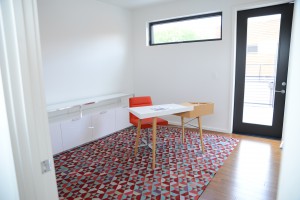 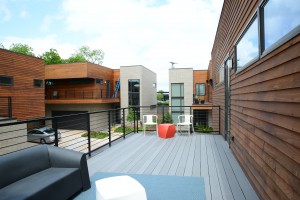 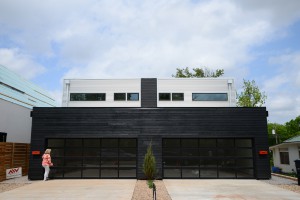 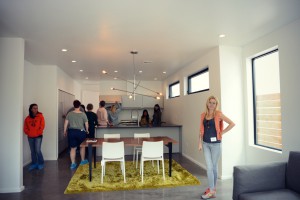 Both of these stops take full advantage of their compact sites to create friendly and appealing “micro-communities” while also providing privacy and true modern living.  Very nice!

Next up was one of the big fan favorites, the Bill Howard designed Arc: 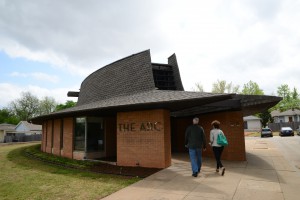 The football-shaped building was constructed in 1964 as the Sunbeam Family Services Center and remained functioning in that capacity until it was sold to Marva Ellard last year.  She very smartly decided to leave the mid-century modern interior space alone for the most part and rent the offices out to small businesses for very reasonable rates.  The Arc is mostly full now with photographers, interior designers, graphic designers, etc.  The big wow space is the glassed-enclosed conference room in the heart of the building that contains a mural-sized and very fun and mod sculpture by famed Oklahoma native artist, John Paul Philippe: 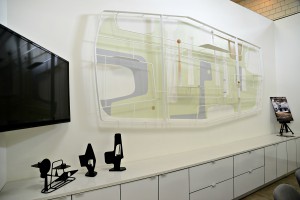 The second level balcony also looks into the conference room and provides the perfect opportunity to launch a few spitballs at unsuspecting victims below: 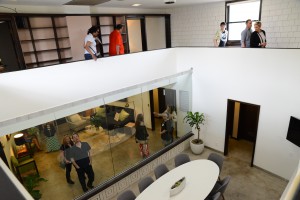 From the Arc, we made our way to the Positively Paseo house, which was designed by John Postic of Studio Architecture and blends so perfectly with the surrounding neighborhood that it’s difficult to tell that this beauty is new construction: 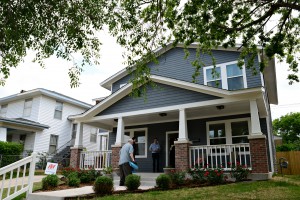 The Positively Paseo group is a non-profit organization with the mission of revitalizing neighborhoods surrounding downtown OKC by filling in vacant lots in blighted areas with new homes that, like this one, fit in with their surroundings.  When one house is completed and sold, the proceeds are used to begin the next project.  This 2,250 sf charmer boasts five bedrooms and an open concept living, dining, and kitchen area that is both functional and family friendly: 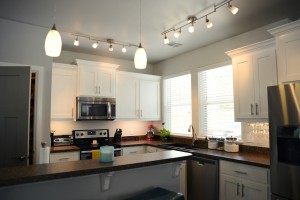 Just across the highway from the Positively Paseo house is the newly refurbished Buick Building in Automobile Alley by Fitzsimmons Architects, where we toured three vastly different spaces.  The first was the main floor lobby and Fulmer Group Law offices that easily fuse both modern and vintage elements to create a fun, zen-like space: 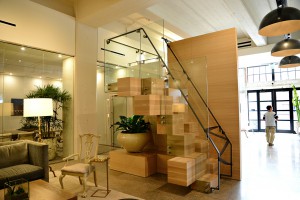 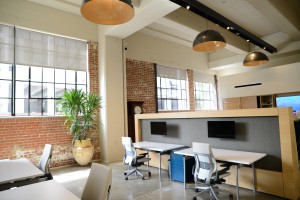 The second and third floors are home to the Canaan Resource Partners offices, and I can honestly say that on all of the tours I’ve ever been on, I don’t think I’ve ever seen a more beautifully and thoughtfully decorated space.  It left everyone in my group breathless: 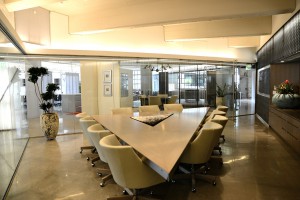 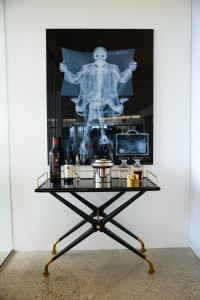 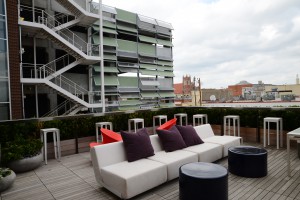 On the fourth floor, the REHCO and Midtown Renaissance space had a completely different but no less impressive feel: 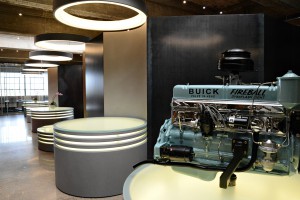 The design for the lobby is based on a Buick Straight 8 Fireball engine as seen in the photo above — each of the circles represents the pistons of that particular engine.  How cool is that?!  Another favorite feature of this office is the collection of doors that were taken from different properties the company owns and used to divide the space: 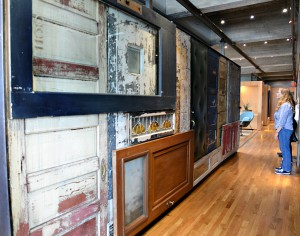 The final residential stop of the day was the redo of the iconic Jesus Saves building on the outskirts of Automobile Alley: 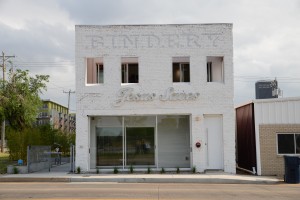 Divided into a downstairs apartment/commercial space in front and a separate, loft-like space on the upper floor, the Allford Hall Monaghan Morris design was truly inspired.  An addition was made to the back of the building for a garage downstairs and huge deck attached to the second apartment: 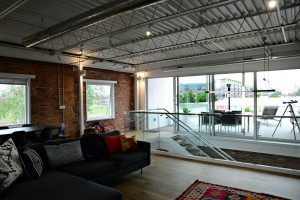 The roomy living/dining space is pretty impressive, too: 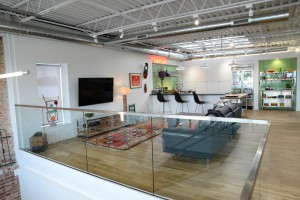 And the master bedroom opening onto a private balcony that also acts as a buffer to the busy street below is truly inspired: 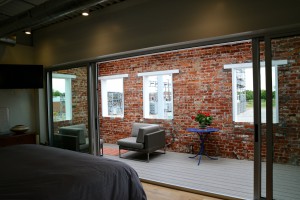 The last stop of the day took us to the PLICO building, one of the brick flatiron buildings facing each other at NE 5th and Harrison. 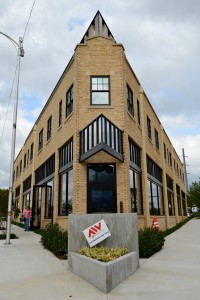 Long vacant, Elliott + Associates renovated the two original floors of the 1924 building and added a third story conference room and outdoor space that is uber modern but somehow fits perfectly with the existing architecture: 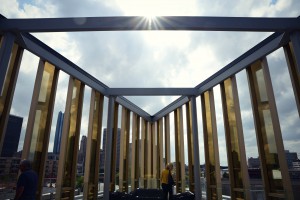 Such a lovely space and what great views of downtown!

As I said at the beginning of this post, this was the best AIA tour — yeah, I know I say that every year but I really mean it this time … well, until next year, anyway!