Henry L. Kamphoefner: His Years at OU and Beyond, Part 3

This is the third of four installments about Kamphoefner’s career.  To read the last installment, go here.

In 1948, Henry L. Kamphoefner arrived at North Carolina State University ready to start work establishing  an architecture school that would replace the architectural engineering curriculum that had been in place for decades.  Before Kamphoefner accepted the job as the university’s first Dean of the School of Design, NCSU Chancellor John W. Harrelson had to agree to 17 conditions Kamphoefner set, one of which gave the new dean complete autonomy in choosing his staff.  Harrelson agreed to Kamphoefner’s conditions, and the fun soon began!

Kamphoefner’s initial act as dean was to fire half the staff and instate his former OU colleagues, George Matsumoto, Terry Waugh, James Fitzgibbon, and Duncan Stuart in teaching positions.  He also recruited Matthew Nowicki, Lewis Mumford, and Eduardo Catalano to join them.  With this all-star team of modern-loving architects and professors in place, Kamphoefner and his colleagues set up one of the most forward thinking and creative departments in the country.  Gone was the staid Beaux Arts-inspired curriculum that, as we know from his 1944 opinion piece in Pencil Points, Kamphoefner deemed antiquated, not conducive to true creative thinking, and impractical for real world applications.  He replaced the old with bold, new ideas that also included the goal of developing a native architecture in North Carolina and the southern regions that hadn’t been seen before.

Soon, NTSU’s architecture school was thriving, and a huge side benefit of having such an outstanding architecture program in place was that over 800 mid-century modern homes were constructed in the Raleigh-Durham area during these very heady golden years.  The North Carolina Modernist group has done an excellent job of recounting Kamphoefner’s highly successful career at NCSU, as well as the careers of his associates at the university and the homes they designed.  So, instead of rehashing all of their abundance of information here, I’m going to provide a plethora of links to keep you busy (like I’ve been) for hours lusting over all of the outstanding architecture in North Carolina.  After salivating over web page after web page of beautiful homes on their site, I’m thinking that a Mod Squad trip to the NCSU area is a must in the not-too-distant future!

I’ve included links to the four architecture professors who resigned from OU to join Kamphoefner at NCSU, along with an image of one of each man’s buildings.  The NC Modernist site has many more images of their work, so you’ll definitely want to click through to each web page to see more visual eye candy of their drop dead gorgeous designs.

Henry L. Kamphoefner — Be sure to check out images of the house he and George Matsumoto co-designed for Kamphoefner, which was added to the National Register in 1996 and has been deemed a Raleigh Historic Landmark: 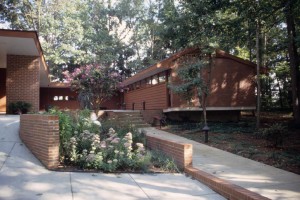 James Fitzgibbon — Here’s his 1949 design of his for the Betty Kirby-Smith House in Sewanee, TN:

Terry Waugh — He was both an artist and architect and designed this stunning home for himself in Raleigh in 1951: 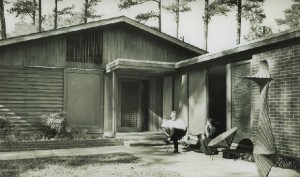 George Matsumoto — His personal home, designed in 1952, was featured on the cover of Better Homes & Gardens four years later:

Eduardo Catalano — Whose jaw hasn’t dropped upon first eyeing this masterpiece Catalano designed for himself in Raleigh?  Oh my, what a stunner it was! 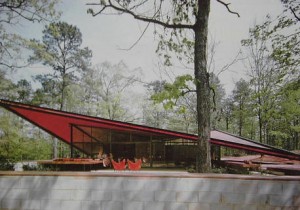 Sadly, after years of neglect, this heart stopping piece of architecture was demolished in 2001 and replaced with two truly ugly McMansions.  Boo!

To see more of the architecture that the Raleigh-Durham area has to offer, start on the main NC Modernist page and plan to spend a LONG time looking around.

As for Kamphoefner, he spent the rest of his career at NCSU but as Modernism began fading in popularity in the late ’60s, the university felt that the Design School was ready to go in a different direction and the dean, perhaps sensing that the golden years were over, retired in 1973.  Although he remained dean emeritus and taught at the university until 1980, Kamphoefner, like so many others of his generation, became very disillusioned with the direction in which architecture was going at the end of the 20th century.

According to his NC Modernist page, “to Kamphoefner’s disappointment, Modernism fell out of favor, both with the public and the profession.  Just two years before his death in 1990, he bitterly acknowledged Modernism’s fall, lamenting that prominent architects were ‘selling out for a neo-modernistic populism’ and that the famous maxim of Louis Sullivan, ‘form follows function,’ was being replaced by  ‘form follows money.'”  And we’ve all seen the nightmarish and often pathetic architectural results that new maxim has led to.

Henry L. Kamphoefner died in 1990 at the age of 83, but I’m very pleased that we here in Oklahoma and our friends in North Carolina are the lucky beneficiaries of his work and his forward-thinking architectural legacy.  I’d like to leave you with one last Kamphoefner quote that will certainly resonate with all lovers of good design:

“As an educator in architecture during the past fifty years, I have dedicated my energy to the production of a lasting excellence in a physical environment.  I believe that excellence in the built environment is one of the primary factors in establishing a serene and spiritual quality to our lives.”*

Henry L. Kamphoefner: His Years at OU and Beyond, Part 2 Why Did Henry Kamphoefner and Crew Leave OU?
Click here to go back to previous page