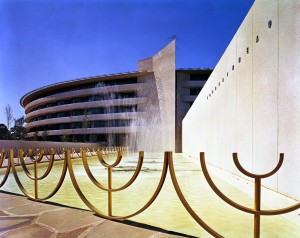 Few Oklahoma buildings have been more beautifully designed — or more ill-fated — than the spectacular, crescent-shaped Fountainhead State Lodge on the eastern shores of Lake Eufaula.  When the lake was completed in the early ’60s, state leaders decided that it would be a great idea to expand Oklahoma’s vast network of state lodges by adding two more along the newly-created waterfront in rural Eastern Oklahoma.  Aided by federal grants totaling over $1 million, the state acquired the rest of the $10 million budget for the two proposed lodges by taking out a 40-year loan that could be paid back from revenue generated by the new facilities. 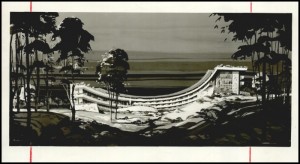 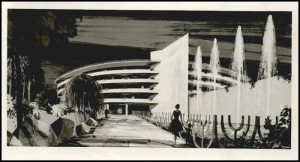 Renderings of the Fountainhead State Lodge, 1962. (OPUBCO collection at The History Center)

With the finances all worked out, construction began simultaneously on the two remote lodges: the modernist glass and stark white concrete Fountainhead on the north side of the lake and the more rustic modern Arrowhead 17 miles to the south.  While Arrowhead resembled the ranch-style look and feel of most of the other lodges throughout the state, the five-story, brilliant white Fountainhead was designed to appeal to more affluent vacationers who expected the amenities of an exclusive resort.  To that end, architects Bailey, Bozalis, Dickinson & Roloff came up with a spectacular modern design that one writer of the time boasted would blend in perfectly in the modern urban areas of Chicago or Dallas … but here it sat, lovingly spooning the shores of a lake out in the middle of nowhere Oklahoma. 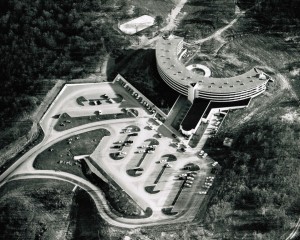 When it opened in time for the summer 1965 season, the Fountainhead State Lodge claimed 180 double rooms overlooking the lake… 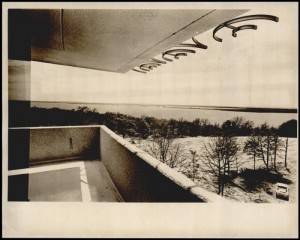 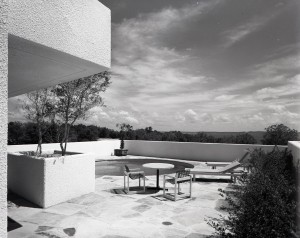 … a posh, 1,300 square-foot, two-bedroom suite with its own private deck and pool… 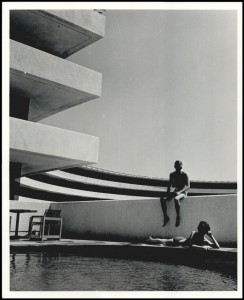 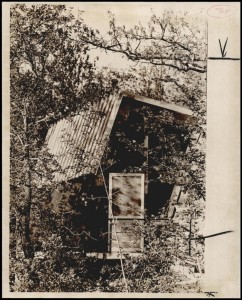 Here’s the lobby and check-in desk: 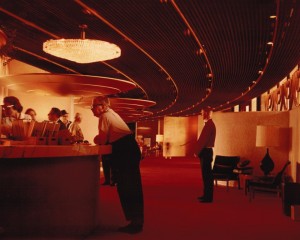 Although it was intended as an upscale alternative to the typical state lodge experience, many balked at the costly Fountainhead room rates — $16 for the rooms (nearly $120 in 2015 dollars) and a whopping $76 (almost $575 today) for the deluxe suite.  But, along with those rates, guests had access to a golf course and pro shop (an exact copy of which was also located at Arrowhead)… 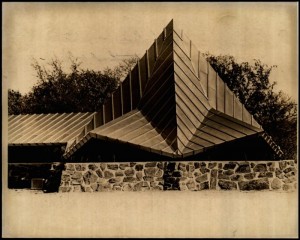 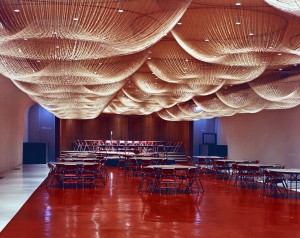 … a gift shop, a swanky round bar and lounge area… 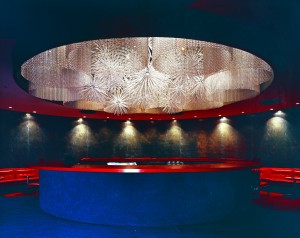 and a private landing strip just yards from the lodge: 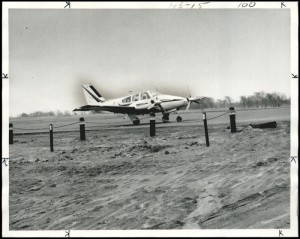 Civic leaders (including Governor Henry Bellmon and publisher/banker Leland Gourley), who heartily supported the building of the lodges, contended that the facilities would break even at 40% occupancy during the summer months, and any proceeds beyond that would go to pay the 40-year note.  They also pointed out that the lodges would bring many jobs to an area that had some of the highest unemployment rates in the state.  Even with these arguments, many voiced concerns about the state taking on such a hefty loan for a “white elephant” like the beautiful Fountainhead.

However, tempers were quieted, for awhile anyway, once the lodge opened and guests from all over the state and beyond flocked to the dazzling white marvel on Lake Eufaula.  Shriners booked conventions in the 500-capacity meeting rooms, weddings and receptions were held poolside, family reunions took place in the elegant dining room, and families enjoyed lazy vacation days on the lake.  In fact, the entire state lodge system was so successful that, in 1966, over 10 million visitors spent time at one of Oklahoma’s lodges. 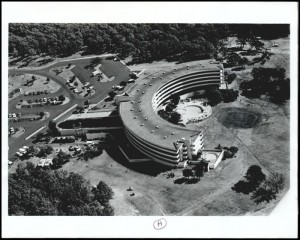 Even with the initial success of both Fountainhead and Arrowhead, the looming debt continued to make many in state government nervous.  By 1970, there was talk of waiving the loan and Oklahoma gifting the lodges and surrounding state land to the Federal government to create the Five Civilized Tribes National Park, but the idea was quashed when the Federal government refused the offer.  The “white elephant” remained in state hands. 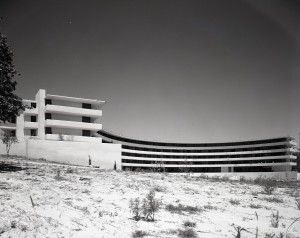 The lodge’s amassing black cloud continued to grow when, on a crisp, winter day in February 1971, first cousins William Buell Franklin, 27, and Edwin Edgar Jones, 24 and a decorated Vietnam veteran, were caught carrying illegal weapons near the airstrip in the park and fatally gunned down Fountainhead’s superintendent Leo Newman and Highway Patrol trooper Bill Walker and gravely injured a state game ranger, all of whom were trying to arrest the duo.  Here, investigators inspect the Walker’s car at the crime scene: 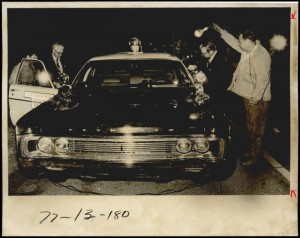 The cousins fled and thus began the largest manhunt in state history until that time, with over 500 officers searching the state park and surrounding areas for the murderers.  Troops searched in vain for three long and very frustrating days, but it was the typically fickle Oklahoma weather that ultimately ended the manhunt.  The fugitives, who had been hiding out in a makeshift mud hut on wooded hilltop not far from the murder scene, watched from a safe distance for three days as an army of officers searched for them. They had no food or water and when a brutal blizzard carrying record winds and low temperatures hit Eastern Oklahoma on the fourth day of the manhunt and washed away their campsite, the murderers turned themselves in rather than freeze to death in the vicious weather.  Franklin, who admitted to all of the shootings, received the death penalty and Jones, who was convicted of aiding and abetting Franklin, received two life terms + 20 years for his role in the crimes.  Franklin’s sentence was later commuted to a life in prison. but the saga of the cousins wasn’t over yet.

In 1976, Franklin, Jones, and seven others tunneled their way out of their prison digs in McAlester and escaped.  However, the cousins were caught two weeks later after a standoff at a remote farmhouse where they had been holding a family hostage.  Once again, the men surrendered and they were returned to prison.  Just nine years later, however, Jones’ original conviction was overturned when it was determined that the 1971 trial judge slipped the prosecutor notes suggesting trial tactics to ensure a conviction.  During Jones’ second trial in 1985, the jury must have decided that 14 years was a long enough sentence for aiding and abetting because they acquitted Jones and he was set free.

And that wraps up the murder and mayhem portion of the story.

As for Fountainhead and Arrowhead, the two Eufaula lodges continued to operate throughout the ’70s and into the ’80s, but not at the levels state officials originally projected.  Thus, it didn’t come as much of a surprise to all of the old naysayers when the Federal government sent the State of Oklahoma a foreclosure notice in 1983 for failure to pay even one dime of the original $9 million loan.  Over the years, the principle and interest had ballooned to over $15 million, a sum a state in the throes of economic depression brought on by the recent oil bust had no way of paying.  So, as it offered to do years before, the state deeded the Arrowhead and Fountainhead lodges to the U.S. Government to settle the debt.

Arrowhead was sold for $2 million in 1985 to the Choctaw tribe, while a private investment group, Bell Equities, bought Fountainhead for $2.6 million and immediately began extensive, bad ’80s renovations that involved lots of “Miami Vice” mauve and teal: 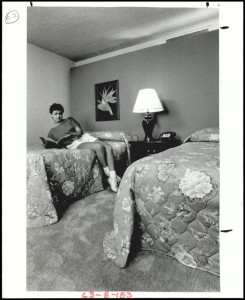 The new owners also painted the still-gleaming white lodge a dull, boring gray and, illustrating just how much times had changed in a mere 20 years, removed the hip, round bar and lounge and replaced it with a fitness center where leotarded women and mulleted men could sweat along to the oldies a la Richard Simmons and Jane Fonda.  Here’s a rendering of the lodge soon after renovations were completed: 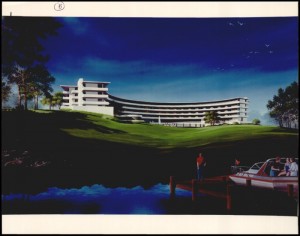 To encourage year-round patronage, the new owners also took out a loan to add an indoor pool and tennis courts and to upgrade the kitchen and other behind-the-scenes systems.  The lodge continued to do well for the next several years, but perhaps not well enough because the same sad fate befell Bell Equities as had the State of Oklahoma before it when the company defaulted on the Fountainhead loan in 2003.  The lodge closed its doors for good the following year.

Once again up for sale, the ill-fated Fountainhead State Lodge was bought for $2 million in 2005 by the Muscogee (Creek) Nation.  Originally, the tribe intended to spruce up the aging building and turn it into a casino but ultimately decided to auction every saleable item (including furnishings, door knobs, and dishes) and unceremoniously demolish the tired but still-stunning lodge.

The site remains empty today.  What a sad ending for such a beautiful building: 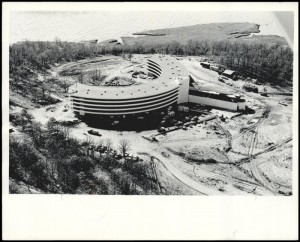 UPDATE 6/26/15:  Squadder Zachary Matthews found this Fountainhead room key at an estate sale and kindly shared these images with the group: 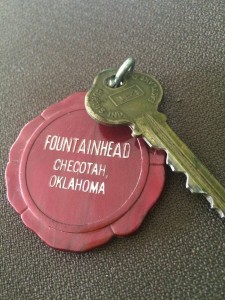 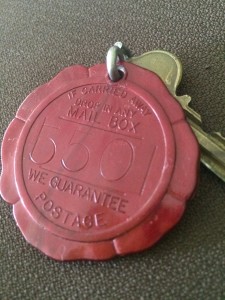 If you have any Fountainhead photos or ephemera, we’d love for you to share your treasures with us!

The Coston House: A Farmhouse Grows — and Grows Younger On the Market: A Fabulous ’50s Flagstone in Edgemere Heights
Click here to go back to previous page