A Real Southwestern Welcome Awaits You at the Thunderbird Inn

At one time, there were dozens of Thunderbird Motels around the country — here’s one I found in Treasure Island, FL a few years ago: 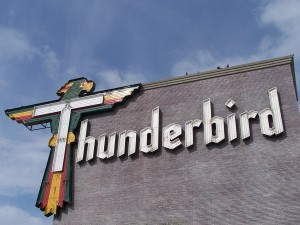 In fact, there have been so many Thunderbird Inns, Lodges, Motels, Motor Courts, Hotels, etc., that there’s a large group on Flickr devoted exclusively to them:

I always thought that they must have been part of a large franchise at one time.  After doing a little research, I found that a few companies did, indeed, own clusters of Thunderbird Motels, with one firm in the Northwestern states owning nearly 40 such named inns in that region.  But many Thunderbirds were individually owned operations like the one here in Oklahoma City:

Around 1955, Al Cook and E.S. Sampson built a modern motel on the northwest corner of the Route 66 Bypass at N. Robinson (now I-44 and Broadway Extension) to take full advantage of the growing numbers of cars travelling in all directions on the newly constructed highways.  They also owned the neighboring Red Plains Trading Post, so guests could do a little tchotchke shopping during their stay, too.  As this ’60s-era brochure shows, the conveniently located motel was just a mile from the zoo (and, later, the Cowboy Hall of Fame) and just a short highway ride to all of OKC’s attractions:

As soon as the 67-room Thunderbird opened its doors, the luxury motel was a success.  Guests hosted parties by the beautiful pool (the largest private pool in the Southwest, according to the brochure’s boastful writers), held wedding receptions in large banquet rooms, pigged out on ample breakfasts in the coffee shop, and enjoyed delicious charbroiled steaks in the upscale restaurant: 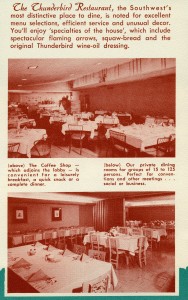 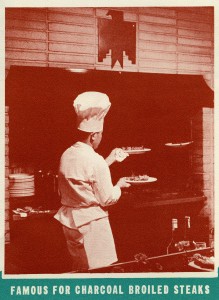 Many lucky diners were surprised one summer evening in 1957 when silent movie legend, Gloria Swanson, popped in to enjoy a steak during a cross country road trip: 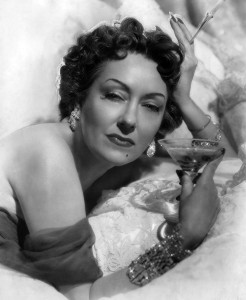 The still-stunning, 58-year-old star (and future, very vocal vegetarian) regaled patrons with stories about her vacation and signed several autographs before taking off, Hollywood style, in a sassy sports car with her gorgeous chauffeur (i.e., boy toy) in tow.  You go, Gloria!

As for the rooms, guests could choose from a small single ($6 and up a night), a twin ($10), or a two-room suite (complete with glass enclosed tub and shower, no less!): 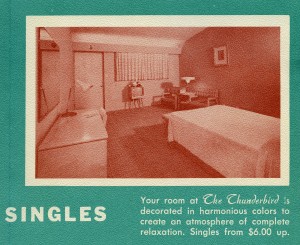 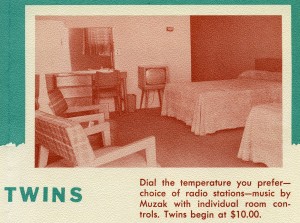 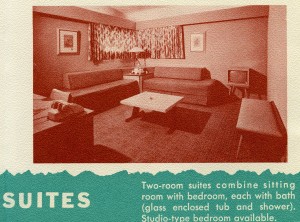 Perhaps the funniest story involving the Thunderbird Inn occurred in May 1957 when a cute little kitty caused all kinds of entertaining mayhem, according to The Oklahoman:

Cats were dirty names in one Oklahoma City policeman’s vocabulary Tuesday.  One of them led him on a merry rat race for a half hour at the Thunderbird Inn Hotel, Bypass Road and Robinson.

There, revolver in hand, Connell prepared to finish the outlaw cat.  The cat was spared, however, when the hotel’s management nixed the gunplay.  It might frighten the customers, they said, or worse, cause the roof to leak.  Attempts to surround the animal were foiled by the side-stepping cat.  Suddenly, it darted for the door and was outside again.

Patrolment Connell was in close pursuit, gun in hand again, and shouting: “Shush! Shoo! Stop! Scat!”  The cat circled twice around the big hotel grounds with Connell lagging farther and farther behind.  And then, suddenly tired of the game, the cat darted out on the expressway and sped east.  That’s the last Patrolman Connell said he saw of him.

“I was too dad-burned tired by that time to care where he went,” fumed Connell at headquarters.  The policeman didn’t pussy-foot around in making his report either.  “Cat evicted!” his terse report said and he returned to his district.

(The following year, unlucky Officer Connell was called to a local apartment to try to evict an unwanted rattlesnake snake that had snuck in and slyly crawled onto a shelf.  He chased and wrangled with the slimy beast, but it, too, escaped the patrolman’s grasp and slithered into a hole in the wall.  This time, however, the officer won the ultimate battle when he and the tenant plastered over the hole so that the snake couldn’t get back in.  Hope the little guy found another way out….)

By 1960, both of the owners had died and their widows were now running the Thunderbird.  They didn’t take to being hoteliers like their husbands did, apparently, because two years later, the ladies sold the motel to two partners, Nelson Salmon and James Kussman, from South Dakota.  The new owners spruced up the property a bit and converted one of the meeting rooms into the T-Bird Club, a dance hall with live music most evenings:

They also heavily advertised the popular restaurant where Ms. Swanson once enjoyed a juicy piece of beef (and, no, I’m not talking about her beau). 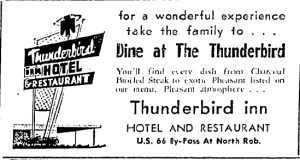 Trouble first loomed for the still-hopping Thunderbird Inn in 1967 when the owners requested to build a mobile home park behind the motel because they were hoping that the added revenue would seal a refinancing deal they were pursuing.  They must have been turned down because the mobile home park never materialized.  The owners kept going, though, probably hoping for some financial miracle to save the day.

In the meantime, the following year saw the Thunderbird’s most scandalous event — well reported event, that is.  One chilly winter evening, a group of over a dozen Phi Gamma Delta boys from OU showed up and rented rooms 306 and 308 for a little frat party.  The party must have gotten loud because the police were called in to bust it up and found two completely nude and “well-known” prostitutes among the testosterone-crazed young men (two of whom were also totally bare assed).  All were booked and several of the boys’ names were published in the paper to their parents’ great embarrassment, I’m sure.  Wonder if they still talk about their wild night at the Thunderbird Inn when they meet up for fraternity reunions….

By January of 1969, the owners were out of money and the once-swank Thunderbird Inn soon closed its doors as a motel forever.  It sat on the busy bypass, sadly awaiting its fate.

Soon, the Department of Corrections stepped in to lease (and later buy) the former motel and convert it into a pre-release center for non-violent inmates.  Here’s a photo of DOC representatives inspecting the converted property before the new facility opened in 1970: 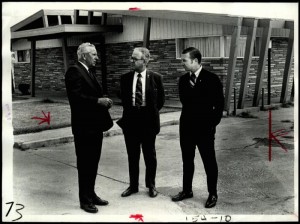 Once opened, the pre-release center was soon at capacity with over 90 low risk prisoners calling the former Thunderbird Inn home.  Inmates were allowed to go to the transition center if they were first-time offenders who received light sentences and were no more than 120 days away from being released.  They used the last days of their sentences to get jobs, obtain individual and group counseling, attain budgeting skills, and even take college classes.  The pre-release center was converted into a minimum security prison for women in 1999, a function that the Thunderbird serves to this day.

There have been many times that I’ve wanted to stop my car along the I-44 service road and peek through the high fence surrounding the prison to see if I can glimpse vestiges of the Thunderbird’s great mid-century architecture.  But, with my luck, I’d get busted like those frat boys and end up in the minimum security prison myself, so I guess I’ll just have to live with looking at these images of the former motel instead: 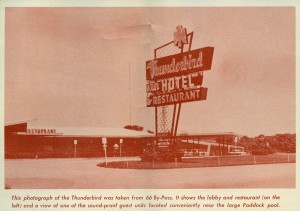 The Capri Motel: To Please the Most Discriminating Guest The United Founders Tower and the Architecture of Hudgins, Thompson & Ball, part 1
Click here to go back to previous page