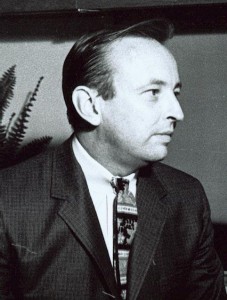 Dean Bryant Vollendorf was born in Sheboygan, WI, on August 25, 1929.  He was influenced by prairie architecture of the region and two random selections from the library, In the Nature of Materials, by Hitchcock and International Style Architecture by Hitchcock and Johnson.  After being told he couldn’t draw by a drafting teacher, he went on to study architecture at the University of Cincinnati, winning the Pierson Prize for Outstanding Thesis in 1956.

After serving as a draftsman in the Corps of Engineers in Alaska, he completed his education in Cincinnati.  He became chief designer with Edgar A. Stubenrauch and Associates, Architects, in Wisconsin before heading up the Florida office of John Randal McDonald, who he continued to associate with throughout their careers.  Still in Florida, he went into practice with John Westerlund and Bob Opsahl, working on residences, offices, and clubs.  He later was out on his own, merging his startling design talent with an equally remarkable teaching career at the University of Florida, University of Oklahoma, Clemson, and University of North Carolina at Charlotte.  He was invited to lecture around the U.S. as well as in Naples, Rome, and Prague.

His designs often appeared in magazines such as House Beautiful and New Homes Guide.  Dean’s curving ‘Baysweep’ design was New Home Guide’s best-selling plan in the magazine’s history.  While teaching a full course schedule at the University of Oklahoma, he flew his airplane across the country completing projects in Wisconsin, Florida, Missouri, Ohio and Alabama, and built several residences scattered throughout Oklahoma.  Meanwhile, he was integrating prominent architects such as Lloyd Wright, Bruce Goff, John Lautner and Fay Jones into a lecture series for his students.  His great talent with students was to see more into their projects than they saw themselves, stimulating and inspiring through serendipity, and hsleping young architects to udnerstand that an architect stands on the shoulders of those who have come before them.  He would continue his teaching career at UNCC until 1996 with a retrospective of his work and the pinnacle of his career being the opportunity to exhibit, lecture and reside in ‘Suntop’ while at Taliesin West.

Dean believed Frank Lloyd Wright, Mies Van Der Rohe and Le Corbusier wre the three icons of architecture, but he never failed to cite lesser known architects for their attributes and influence.  His legacy ranges from prefabricated homes to free-form concrete structures.  Dean never stopped designing.  He did not require a client to motivate incredible renderings of communities, skyscrapers, hotels and houses.  He is noteworthy for his gorgeous and imaginative drawings, be they by hand or computer.

Dean died in May 2008.  His body of work is housed at the Oklahoma History Center.