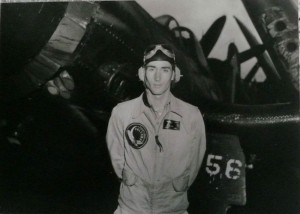 A. Blaine Imel was born in Blackwell and raised in Cushing.  After graduating from high school in 1939, Blaine’s father sensed that the U.S. would be entering the war soon and suggested that he enroll at the Oklahoma Military Academy (now Rogers State University) and learn to fly.  Blaine followed his father’s advice and quickly found that he loved flying, a passion that he would foster for the rest of his life.  After graduating in 1941, he headed for OU to study architecture but, as his father predicted, America soon joined the war and Blaine left college to enlist in the Marine Corps.  He trained in Kansas, Florida, and Texas and even met up and received flight instruction courses with future president, George H.W. Bush, during this time.

After he completed his coursework, Blaine was assigned to the USS Bunker Hill, a carrier ship based in the Pacific theater.  He was part of Admiral Mitscher’s fleet, flying with the squadron that dropped bombs on Tokyo.  He also participated in the invasions of Iwo Jima and Okinawa.  While the USS Bunker Hill was supporting the invasion of Okinawa on May 11, 1945, two Japanese kamikazes struck the aircraft carrier, causing a severe explosion and fire.  Blaine survived by leaping 11 stories from the injured ship into the water while 346 of his fellow sailors and airmen were killed and 43 others were missing and never found.  He earned the Purple Heart in the aftermath of the epic battle to take the island.  In all, Blaine flew 66 combat missions and shot down three enemy planes, all of which earned him two Distinguished Flying Cross medals and five Air Medals.

After the war, Blaine returned to Oklahoma and his studies at OU.  He intended to study medicine, but when one of his biology professors saw some of the drawings that Blaine had completed for an assignment, he suggested that he go talk to the Architectural School instead.  That one little event changed the direction of Blaine’s entire life.  Soon, he met architecture professor, Bruce Goff, and the two became great friends in addition to being student and teacher — later, Blaine would be instrumental in the establishment of the Bruce Goff Professorship of Creative Architecture at OU.  During his time at OU, Blaine also represented the university at the International Congress of Architects in Havana in Cuba in 1950 and was awarded 1st mention for his design for a theater.  He graduated from OU that same year and began practicing right away.

According to Blaine’s daughter, Barbara, “My father had a love for building houses. I think he must have felt that he could express that creativity more in that discipline than in office buildings. We moved to Wichita after his graduation and he tried to start a practice there. That was not successful so we moved to Tulsa. He began to practice architecture with Bob Buchner and Jack Welch, and they had a little gift shop as well on about 17th and Main in Tulsa.”

By the 1950s, many of his old Cushing friends had made good and wanted new, modern homes to go along with their success, so they called Blaine back to his hometown to create a little residential magic for them.  He designed approximately eight homes in Cushing, then moved on to remodeling older downtown buildings and designing new structures there.  Barbara believes that “designing commercial buildings did not provide him with the full realization of his creative talents. He turned to model ship building – one of which I now have. He began to create Bonsai plants. Water color paintings became another hobby.”
“He was part owner in a ranch for a while and loved riding horses. He created a garden railroad in his backyard and would open it up every spring.  He loved creating the cars, building the little buildings, and watching the trains go around the tracks. These were not small trains! He loved boating, and had a houseboat at Grand Lake for many years.  He still flew and took many vacations via his Mooney plane. He had a special interest in Japanese art, which I always found interesting since he was bombing Japan during WWII!  Golf and tennis were usually always on the schedule during the week.”

“The Tulsa Air and Space Museum had become his love in the later years. He served as Vice President, and his firm provided the design work for the museum, which was completed in 2005. In all areas of endeavor, Blaine was recognized for his talents, ability, and enthusiasm. He was named to the Tulsa Air and Space Museum Hall of Fame; he was a member of Southside Rotary for over 30 years; Cushing High School honored him as a Distinguished Hall of Fame Graduate; Rogers State University named him to their Hall of Fame. Blaine was a charter member of the OU College of Architecture’s Board of Visitors and was a member of the Civil Engineering and Environmental Science Visiting Council.  In 1999 he was honored with the Blaine Imel Professorship at OU, which is an endowed chair to bring outstanding practitioners to the school each semester. In 1999, OU awarded him the Regents’ Award of Distinguished Service.”

Barbara also has the fascinating memory of her dad: “When I was very little, he would take me to his labs at OU and I got to watch him putting models together. Of course, this was way before computers and CAD systems, so all the models were done by hand. I must confess, tho, that my main interest was in the little beads that he used in the tiny gardens, because they were candies and I got to eat them!  I remember when the Price Tower opened in Bartlesville, and we drove up from Tulsa for the grand opening. I don’t know if it was that time or another, but we did get to meet Mr. Wright.”

Lucky girl!  Blaine Imel died in 2005, but he left behind an outstanding array of architectural wonders in Oklahoma that will delight and inspire future designers for a very long time.

God Mod: The A-Frame Magic of the Lutheran Church of Our Redeemer
Okie Mod on the National Register
On the Market: Two NE Oklahoma MCM Treasures