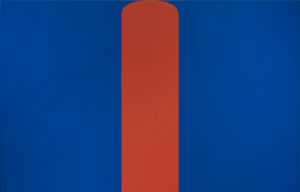 The half-century or so following the end of World War II was one of the most fertile periods in the history of abstract painting. The works featured in Postwar Abstraction: Variations highlight a period of remarkable creativity, when ideas of abstraction and the nature and limits of artistic mediums were being hotly contested by artists. Associated with movements as diverse as Abstract Expressionism, Color Field painting, Hard-Edge painting, Op Art, and Minimalism, artists continually sought to redefine what painting was and what it could be.