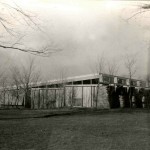 Architect R. Duane Conner built this home for his growing family.  He was still young (28) and not making a lot of money so he and his wife, Jean, bartered and negotiated with various contractors and friends to get the house built at a low cost.  They also did a lot of the work themselves and would drag their two small children to the site while they worked on the house.  The thing their daughter, Susan, remembers most is the care her parents took in building the flagstone pillars that were the dominant feature on the front of the home: 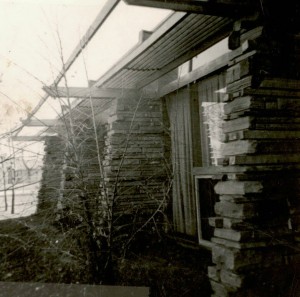 They worked together to meticulously construct these pillars, and their precision paid off.  In spite of surviving an explosion in 1958 and the elements for the over 60 years, there wasn’t one crack in the grout or any sign at all of settling in these pillars when the dilapidated and long-vacant house was torn down in 2012: 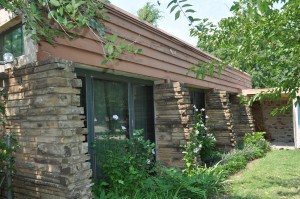 When it was built, the house had water-cooled air conditioning (from a small water tower that was located on the property), which was quite a rarity for homes in Oklahoma in 1951.  As with Conner’s Dr. M.W. Glasgow house in Edmond, passersby would stop and take photos of the house after it was built, and Duane’s daughter vividly remembers people asking my grandfather if they could take tours of the home.  They would just look at the house in wonder, awe, disgust, confusion … name the emotion, and I’m sure that someone felt it.  Dubbed ‘the chicken coop” by neighbors and gawkers, the house quickly became a destination spot for Sunday drivers.

One day, Duane was on the roof clearing gutters when two older women stopped, got out of their car, and started wandering around the grounds.  Without realizing that the home’s architect was within hearing distance, one said to the other, “What kind of idiot would design a house like this?” To which Duane replied, “This kind of idiot!”