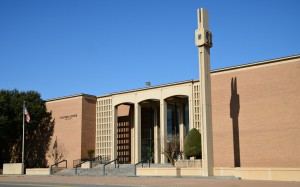 This elegant office building on the edge of Heritage Hills and even though it looks harmless enough, it was the cause of many an angry outcry in the early 1960s.  That’s because the beloved and very stately Colcord mansion reigned supreme on this lot from the time it was constructed in 1901 until the Standard Life demolished it in 1965 to make way for this much more modern building.  Here’s the home in all of its glory when it was still gleaming and new. 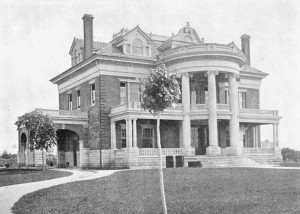 Standard Life bought the home after the last of the Colcord family died in 1951.  Ten years later, they decided that it was time to construct a more practical office space.  People yelled and protested the demolition, but their cries fell on deaf ears and the grand estate came down in 1965: 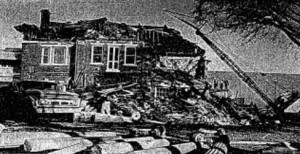 The loss of the Colcord mansion spawned the area’s first historic preservation movement, as Steve Lackmeyer explains in this fascinating Oklahoman article.  After the home was demolished, the new Standard Life building went up, but the company itself became insolvent in 1976 and was taken over by another insurance company before it, too, went out of business.  The building was occupied by another business for awhile and then became the Colcord Center in the late 1990s.

Even with all of the controversy surrounding the building, the design holds up well today and is certainly a standout along NW 13th.