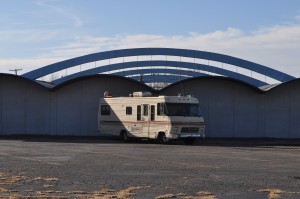 Holiday Bowling Lanes was the fourth bowling alley to open in OKC in 1959, and it just barely made it by greeting its first customers on December 5th of that year.  At the time, it was the largest bowling alley in the city, with 32 lanes (16 back to back), but it didn’t hold the title for long.  By 1960, another alley opened that had 34 lanes.

The great MCM car wash next to the bowling alley was constructed at the same time at the Holiday Bowling Lanes, and both structures are on the 2009 OKC MCM survey.