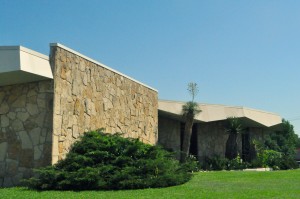 As Oklahoma City moved to the ‘burbs in larger and larger numbers, it quickly became apparent that the downtown and Capitol Hill libraries wouldn’t be enough to serve the needs of the community.  So, the City of Oklahoma City acquired  two and a half acres of land at the corner of NW Expressway and Villa and a new, $300,000 library was planned.

Then, it was architect Jack Mills (of Turnbull & Mills) turn to get to work.  He designed a circular, stone and glass building with 18,000 sf of space containing an auditorium, conference room, staff lounge and both kids’ and adult sections: 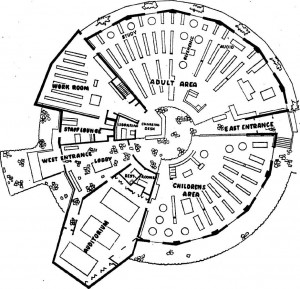 When the shiny, new Belle Library opened its doors in the spring of 1963, it boasted a collection of 30,000 books and facilities for two travelling bookmobiles.  Over the years, the interior has been updated to incorporate computer facilities and more book space, but the exterior remains in excellent original condition.

The Belle Isle Library is on the 2009 OKC MCM survey.