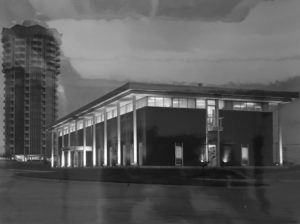 Designed by Hudgins Thompson Ball and constructed by the Metropolitan Paving Company, this 12,000 office building was built to compliment the other architecture in the fledgling Founders District.  It consisted of black brick with exposed white columns topped by a band of windows that gave the illusion of a floating roof.  The Ackerman advertising agency (now Ackerman McQueen) occupied the top floor and the engineering firm of Sotor and Sprehe occupied most of the first floor, with remaining space available to individual tenants.  Ackerman remained in the building until 1984 and sold it the following year when it became part of a retail center that never took off.

In 1995, Maharashi Vedic University bought the building to use as a meditation training center, but that didn’t last, either. The structure was bought by a hotel group in 1999, and they hired Bockus Payne to turn it into the yucky piece of ugliness it is today. 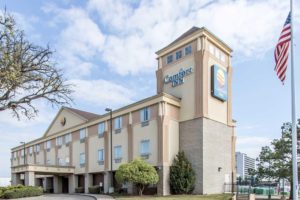 During the renovation, which was completed in 2001, a third story was added to the building to increase its square footage, and it is now home to the Comfort Inn at Founders Tower.