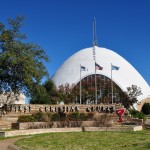 TO READ ABOUT OUR EFFORTS TO SAVE THE CHURCH, GO HERE.

ON APRIL 3rd, THE HISTORIC PRESERVATION COMMISSION VOTED 7-2 TO INITIATE THE PROCESS TO DECLARE THE CHURCH A LANDMARK.  THIS MEANS THAT IT CANNOT BE DEMOLISHED WHILE THE COMMISSION IS WORKING ON THEIR STUDY, WHICH COULD TAKE UP TO SIX MONTHS.  WE HOPE THAT GIVES THE CHURCH TIME TO FIND A BUYER WHO WILL TREASURE THE BUILDING AS MUCH AS THEY HAVE.

Bill Alexander, the minister at First Christian Church, was no traditionalist, and when he and the congregation decided it was time to build a new church on the 40-acre property that had once been home to the Edgemere Golf Club, he wanted something entirely new.  He wanted “the church of tomorrow.”

Lucky for him, a young architect fresh from working at Oak Ridge during the war was a member of the church and was as much of a forward thinker as Alexander himself.  His name was R. Duane Conner.

Conner and his partner, Fred Pojezny, were both graduates of Oklahoma A&M (now OSU) and were eager to design something great.  Working with Alexander, their first design for the new church to be built at the corner of NW 36th and Walker was an International Style complex that Conner termed “honest architecture” that would be “ever-contemporary.” 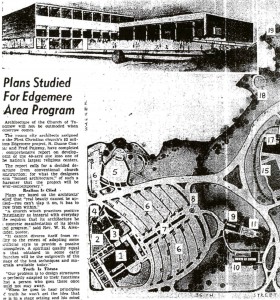 While plans for the entire $2.1 million complex were being finalized, construction began on a 3,600-seat outdoor amphitheater at the northwest end of the property where the congregation could put on plays and concerts and also have services “under the stars.”

Fundraising efforts continued for a few years, and as time passed, the design changed drastically.  In 1953, the church published a promotional booklet showing off the firm’s second, much grander design that featured a crystal-like glass sanctuary that looks more “Logan’s Run” than 50’s Oklahoma City. 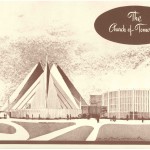 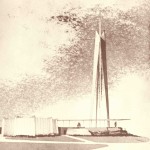 A round educational building and theater were also part of the second design (and remained pretty much unchanged in the third design).

The congregation enthusiastically accepted this second design, but after costs were tallied, they realized they couldn’t afford such an opulent sanctuary (their $2.1M budget had shrunk to $1.1M), and the architects went back to the drawing board … again.  Conner had been toying with the idea of working with thin-shell roof designs for awhile, and he saw the First Christian Church as the perfect opporunity to experiment with the process.  Because it was so lightweight, thin-shell concrete enabled architects to design buildings without the interior support that had always been necessary, so spaces could be opened up like never before.  Also, roof shapes could take almost any form, and they were very durable and economical to build.

So, Conner went out on a limb and designed the sanctuary with a concrete domed roof and no internal support, and, once again, the congregation heartily approved.  Word soon spread about the revolutionary new design, and as construction began in 1956, many naysayers (including engineers and other architects) expressed concern that the dome as designed would collapse under its own weight.  Confident that his design would be validated, Conner assured everyone that the dome wouldn’t falter, and it was built as he specified. 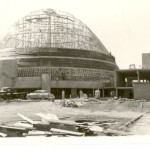 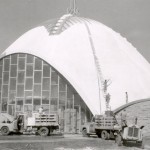 After it was constructed, engineers tested the roof and reported that the dome could easily handle the weight distribution, and the dome still stands, in seeming defiance of gravity, all these years later. 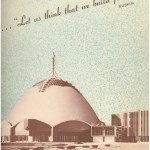 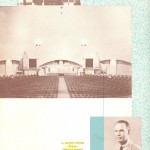 When it was completed in time for Christmas services in December 1956, Alexander’s “Church of Tomorrow” became a reality and was hailed as an architectural marvel in such publications as Life, Newsweek, and Architectural Record.  It was also featured several times in the Daily Oklahoman: 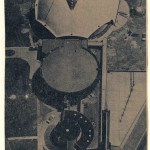 The church was listed as one of the 20 most significant structures in OKC in 2002, it was cited on the 2009 OKC MCM survey, and the entire complex was added to the National Register in 2011. 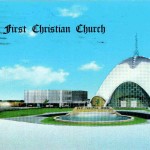 Go to the Mod Blog to read a more detailed history of this iconic church.  You can also read more about the interesting roof design here.

In 2016, First Christian put the entire 31-acres site up for sale and nothing much happened for the next two years.  In the fall of 2018, we began hearing rumors that a potential buyer was making inquiries about any restrictions to demolishing the church and since it is not located in a Historic Preservation (HP) district, there are none.  An owner can take it down at any time.  That’s when the Okie Mod Squad started a petition to Save the Egg, which resulted in us gathering over 5,000 signatures pretty quickly and the press reporting on the church’s endangered status.

In February, Ward 2 councilman, Ed Shadid verified our fears after a board member at the church confirmed that a potential buyer wanted to demolish the buildings, and he made a motion at the March 12th City Council meeting to get the ball rolling on making the church a historic landmark.  Go to this Mod Blog about the difference between a building being on the National Register vs. becoming a historic landmark.  Also, representatives from the Central Chapter of the AIA and the Oklahoma City Foundation for Architecture, as well as members of the public, were at the meeting to express their support for the church becoming a landmark.  After a long discussion, a few of the members of council cited owner’s rights and were ready to vote against the motion, but Ward 8 councilman, Mark Stonecipher asked for a delay in the vote so he could research the situation further.

This stay was a great gift to us, but we soon found out that the First Christian board and representatives were against the Shadid’s motion because they believed any kind of designation would deter potential buyers.  This resulted in many meetings with both sides arguing their sides with passion and conviction and the church continuing to remain in a precarious position.  As a result, Preservation Oklahoma released its 2019 Most Endangered Places list and the First Christian Church made its second appearance since the church hit the market.

On Easter Sunday, Crossings Community Church announced their intention to purchase the three main buildings at First Christian — the sanctuary, education building, and Jewel Box theater — to use as a satellite campus.  What great news!  It was revealed at a subsequent City Council meeting that new Ward 2 councilman, James Cooper, and Stonecipher were able to get members of Crossings and First Christian together in a room to hash out a deal, and they all worked out an agreement whereby both churches promised not to tear down the iconic mid-century marvel as long as they own the buildings.  Crossings also agreed that the City of Oklahoma City would have first right of refusal if they ever sell the buildings, and City Council can also declare them Historic Landmarks at that time to protect the church from future owners demolishing the structures on the sly, like what happened to Founders Bank and the Wavy Bank.

Currently, Crossings is in the midst of doing their due diligence prior to purchasing the church, but the sale looks like it will go through and the church is safe for the foreseeable future.