Recapping the Save the Egg Rally

Ever since we first heard that the potential new buyer of the First Christian Church property fully intends to knock down all of the buildings on the nearly 32-acre campus, the Okie Mod Squad has been hard at work trying to prevent that sad and devastating possible fate.  As you may know, we’ve asked the City Council to get the ball rolling on declaring the church a landmark, which would mean that there would be a formal review of any demo permit before it could be granted.  This would ensure that the same fate won’t happen to the church that befell the beloved Founders Bank last fall.  Luckily for us, we have a champion in Ward 2 councilman Ed Shadid, who plans to make the motion to consider landmarking at the next City Council meeting on Tuesday, March 12th.

To encourage other members of the City Council to vote in favor of landmarking, we held a Save the Egg rally at the church on March 6th.  It was one of those gusty Oklahoma days with bone chilling winds and dipping temperatures, but the sun was out and everyone was happy to be there nonetheless.

Here are a few photos from the rally: 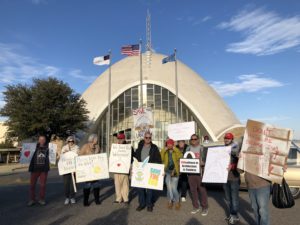 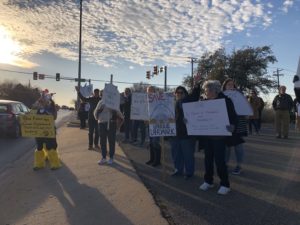 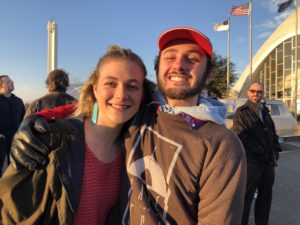 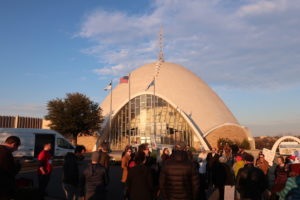 Councilman Shadid was very gracious and popped by to say a few words: 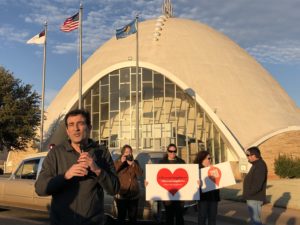 Also, we challenged everyone to make imaginative signs and boy did we see some good ones… 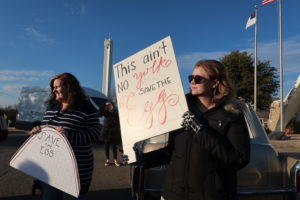 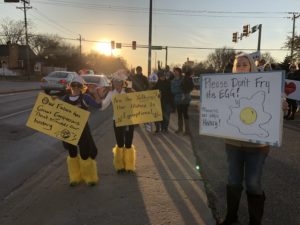 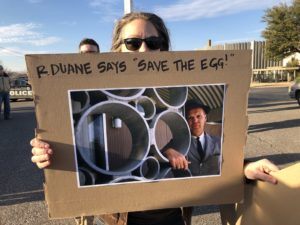 … but the winner of the $25 Target gift card was Sherry Spencer, who created a real work of art with her 3D sign: 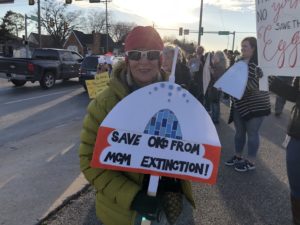 Those are paint chips in the windows!  Very creative.  Sherry also captured these photos of the rally… 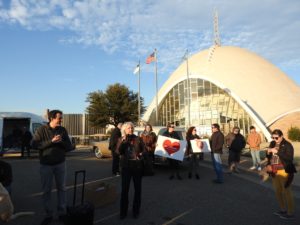 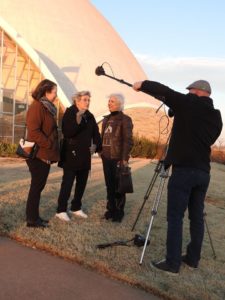 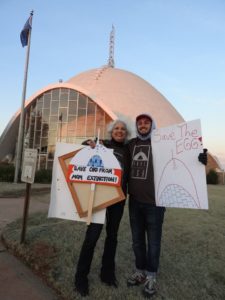 Both KFOR and KOKH were on site conducting interviews, too.  KFOR even featured the church in separate stories twice in one day!

Thank you, Squadders, for coming out and showing your support for this building.

The City Council meeting was very interesting.  You can view it here — go to the 2:11:56 mark.

We have some amazing members and friends who stood up to speak for saving the church. Thank you, Ken Fitzsimmons, Cayla Lewis, Mark Faulk, Matt Goad, the AIA, and Tony Blatt for taking the time to participate. And thank you to the supporters who were there cheering us on! We are very lucky to have all of you on our side.

It was a bit surprising that this very pro-owner’s-rights council didn’t vote against the motion outright. We appreciate Mark Stonecipher and Meg Salyer very much for requesting a delay in the vote to initiate the landmarking process so they can study the situation further.  The vote will take place at the April 9th meeting.

In the meantime, we have learned that the HP Commission doesn’t need the City Council’s permission to initiate the landmarking process, and they are planning to vote on it at their next meeting on April 3rd.  If it passes, they will begin the process of doing due diligence and research to determine if the First Christian Church should be declared a historic landmark.  That means that there will be up to a six-month moratorium on any demolition until they finish their investigation.  At that point, the HP Commission will hopefully recommend to the City Council to landmark the church.  Of course, whether the council votes to is up in the air.

Finally, church leaders made it very clear during the City Council meeting that they want to see the church preserved also.  Thanks to our efforts to landmark the church, there are new potential buyers who either have or will come forward to purchase the church — hopefully buyers who are more well suited than this one who wants to demolish the building. The church can still consider these other offers and decide to go with one that keeps the church intact while developing the rest of the site.  Let’s hope that’s exactly what they do.

The HP Commission voted 7-2 to initiate the landmarking process!  So, that means that there’s at least a six month moratorium on any possible demo of the building while the commission puts together their study.  I hope this will also give the church time to find a buyer who will love and take care of the buildings as much as they have all of these years.