The Saga of the Split-T Burger 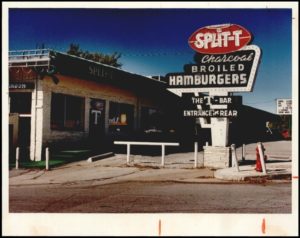 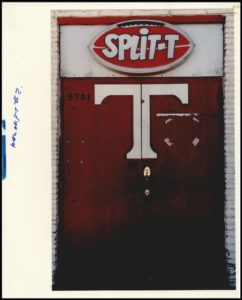 Named after the football formation made famous at nearby OU, the Split-T was an OKC institution for over 50 years and served the BEST onion rings and charbroiled hamburgers (make mine a chili cheese burger — with real, grated sharp cheddar cheese — and raw onions on the side, please). I’m salivating just thinking about it….

With its football-themed decor, scattered OU paraphenalia on the walls, and red and white checked table cloths, Split-T was THE hang out for every high schooler of every generation from 1950 to the millenium. It was the place where a lot of people had their their first kiss, their first beer, their first… well, you get the idea. It was a hoppin’ place, indeed.

When my mom, sister, and I moved to Dallas in the early 70’s, my mom’s one lament was not having Split-T around. No more yummy, freshly charbroilered burgers. No more super crunchy, munchy onion rings.

She has always fancied herself a hamburger connoisseur and proceeded to drag my little sister and me to every burger joint in Dallas looking for a patty that compared with the juicy, well-flavored ones at Split-T. We ate at fancy places in North Dallas and Highland Park, hit every hole-in-the-wall spot in Oak Lawn and Oak Cliff, made the trek to the burbs of Mesquite, Richardson, and Farmers Branch, all to no avail. Nothing, I mean NOTHING, compared to a burger from Split-T, according to her. When we ventured out on our eating expeditions, I didn’t really care what the burgers tasted like — I was way more concerned about getting back home in time to plant myself in front of our small, late 50’s model black and white TV (with rabbit ears, of course) to watch “Bionic Woman” or “Match Game ’76.”

After years of trying every single place that sold a burger in Dallas — can I tell you how tired I was of burgers by this time? — my mother and aunt (who also lived in Dallas and was equally as disappointed in the quality of burgers there) came up with a great idea:

Why not go to Split-T, order a bunch of burgers, take them back to Dallas, freeze them, then simply pop one in the microwave whenever they were feeling the need to consume a really good burger?

It sounded like a great idea, so my mom and aunt gathered up as much money as they could afford to blow on such a frivolous expenditure (they were single moms with little extra income). They set out to (or I should say, they made me) return for deposit the dozens of cartons of Coke bottles that were piled ceiling high in a kitchen alcove; reduced their smoking habits by at least a few packs a week; and made my sister, cousin, and I sack lunches (bologna and white bread — yum) instead of buying us lunch tickets.

After several weeks of scrimping and saving, my mom and aunt had enough money to buy about 30 burgers each. So, the next time they took us kids to OKC to see our dads, they were ready.

That Sunday, on the way out of town back to Dallas, my mom and aunt pulled up to the Split-T drive-thru window in my mom’s sky-blue Pinto. Half giggling to herself, she said, “Um, I’d like 60 chili cheese burgers, please.”

“Excuse me, but did you say 60?” the employee asked, as if she didn’t quite hear my mother correctly.

“That’s right. Sixty. 6-0. Ten times six.” My mother and aunt were quite pleased at the incredulous stare on the poor girl’s face.

After the employee picked up her jaw off the floor, she shouted out a few commands to her cohorts and got the entire staff working like mad preparing the burgers, all the while suspiciously eyeing the two crazy ladies and three little kids in the blue sub-compact with Texas plates. I could tell that she was trying to solve the mystery of the 60 burgers while she was stuffing them, one by one, into huge white paper sacks with the red Split-T logo on the front. She still had that same quizzical look on her face as she placed the last burger in the last bag and handed it over to my gleeful mother, and I knew as we drove off that she still hadn’t figured out my mom and aunt’s brilliant plan.

So, we drove all the way back to Texas — two giggling adults, three kids squished in one half of the Pinto’s backseat, and one ice chest filled to the brim with chili cheese burgers. I was the lucky one who got to sit smashed up against the ice chest, smelling cooked beef and spicy chili the 200 miles back home.

All the way home, the conversation between my mom and aunt went something like this:

Mom: “I think I’m going to take one to work tomorrow.”

Aunt: “Oh, I might make one for dinner tomorrow night.”

Mom: “Should we have a party and invite all of our Texas friends to show them what a real hamburger tastes like?”

Aunt: “No way! We worked hard for those burgers. I want to eat every last one of them.”

Aunt: “I think I might make one for dinner when we get home tonight.”

Mom: “Ooo, and I could pop one in the oven for a midnight snack.”

If I was sick to frickin’ death of hamburgers before this little adventure, imagine how much I hated them when we finally got home and my mom assigned me the job of wrapping each burger in foil and finding space in the munchkin-sized apartment freezer (half filled with a thick layer of ice — no defrosting freezer for us) for our new treasure.

All of the burgers finally crammed into place in the freezer, my job here was done, and I never wanted to see another beef patty again.

The next evening, my mother carefully removed one of the prized burgers from the freezer and took it over to my aunt’s house to heat up.

My aunt, who lived across the street from us, had just bought her first ever, refrigerator-sized microwave — I think it was one of the first ones ever mass-produced and I swear, that sucker took up half her kitchen. So, like religious devotees, she and my mom ever-so-gently placed their burgers in the microwave, turned the dial to one minute, and watched through the glass as those babies cooked.

Ding. My aunt slowly opened the giant microwave door, and both ladies breathed in deeply to catch a whiff of charcoal and chili spices. They looked like they were in deep, euphoric prayer paused like that in front of their dinner. I’ve never seen them more reverent.

They each took their burger and didn’t even wait to put them on a plate or grab a napkin (which you need plenty of with Split-T chili cheese burgers). They both opened their mouths as wide as they would go and chomped down on about 1/3 of the burger.

Eyes closed, their happy, food-filled smiles filled the room as they started to chew. Slowly, their looks of joy turned — their eyes began to bulge and water, their smiles became frowns, and they both made a mad dash to the sink to spit out a light brown, barfy-looking conglomeration of burger, cheese, and chili.

They spat and spat until every last morsel of food was in the sink. Then, they grabbed their ever-present Cokes and chugged them, ran for a few puffs of the smoldering cigarettes they had left in the living room, all the while primal screaming at the tops of their lungs.

Apparently, my genius aunt and mother didn’t anticipate the burgers getting freezer burn and very probably didn’t know how to use the microwave, either.

But, these two had saved and saved to get the money to buy 60 burgers, and they weren’t going to throw them away. Oh no.

For months afterward at dinner time, I would hear my mom — in her most sweet sounding voice, which always meant trouble – “Hey, girls, do you want a burger for dinner tonight?”

Imagine the loudest “NO” you’ve ever heard, then times that by about 10 and you’ll get some idea of the response my sister and I would shout back in unison. We were no fools.

So, not able to get anyone else to eat the burgers, my mom and aunt dug in and spent the next few months eating — and gagging on — every single last one of those chili cheese burgers.

They didn’t gripe too much about Texas burgers after that; in fact, I don’t think I remember either of them eating another hamburger for quite a few years afterward, much to my delight.

Skip forward about 20 years. I’ve just moved back to OKC and have probably (half-heartedly) eaten a total of three hamburgers in the years since the now infamous Freezer Burn Incident, as our Split-T misadventure has come to be known.

But, I’m back in town and decide to drop by Split-T just for fun. In homage to my aunt and mom, I order a chili cheese burger and some onion rings and sit back in my booth with the voice of “Why did I just order that?” ringing in my ears. The food comes out, and I gingerly pick up the burger, which is oozing cheese and chili all over the place, hesitate, then take a itty bitty bite.

“Hey, this is pretty good.” Then, I take another, bigger, bite and think, “Man, this is awesome,” and before you know it, the whole thing is gone.

Chili and cheese dripping from my chin a la a Carl’s Jr. commercial, I finally get it. I finally understand what my mom and aunt were talking about all of those years ago. There is no better burger than Split-T. Period.

Alas, Split-T closed in 2000, after 50 years in operation. Soon after, the building was torn down to make way for a strip center, and a Sonic was built across the street. This sign pays homage to an OKC institution and will forever remind me of my goofy mom and aunt, who would do anything for a good burger. 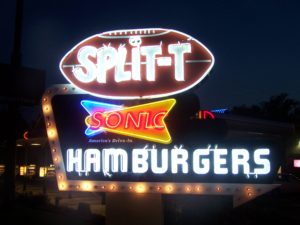 Here’s a photo by Jim Jordan of his classic Cadillac in front of the Split-T mural taken around the time it closed: 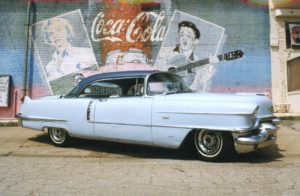 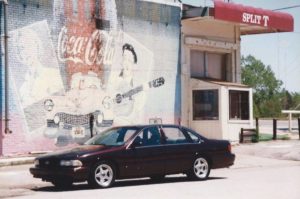