As the 1960s dawned, jet airplanes were just becoming a thing and one of the very first airports designed specifically for jet travel was the Tulsa Municipal Airport (renamed Tulsa International Airport in 1963), designed by Murray Jones Murray.  Soon after the airport opened in 1961, architectural photographer Julius Shulman came a’calling, and his photos and a detailed feature article about the airport appeared in the April 1963 issue of Progressive Architecture.  It’s a pretty fascinating read: 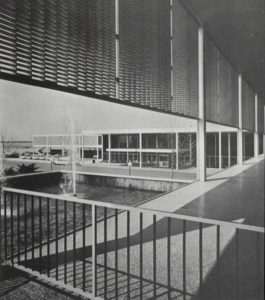 The major objectives in the design for this terminal were the separation of essential passenger facilities from concessions and the exclusion of spectator traffic from passenger circulation areas.  The architects’ original proposal was to place the waiting room, concessions and dining facilities in a separate building, linked to the main terminal by bridge.  Neither the airport consultants nor the municipal authorities favored this scheme, however, since it would reduce the attraction of revenue-producing facilities.  The scheme was therefore modified to give the restaurant a position overlooking the apron and bring concessions closer to passenger routes.

A two-level passenger circulation scheme, with separate automobile access for arriving and departing passengers, was ruled out for economic reasons.  Separation of passenger and visitor was achieved, however, by utilizing the change in level of the site.

Passengers enter and leave the terminal at an automobile platform on the field level.  Departing passengers pass through the ticketing area and proceed by escalator to the upper level, where they can go directly to the boarding fingers or detour to the waiting and concession area or the restaurant.  It is necessary at present to descend to the field level to board the plane, but the fingers have been designed and constructed to permit second-level boarding ramps in the future.  Arriving passengers follow the same route in reverse, leaving the terminal through the lower level baggage claim area.

The visitors’ entrance on the upper level leads directly into the waiting and concession area and is convenient to the restaurant.  Visitors are given an opportunity to observe ticketing and baggage claim activities on the level below, but do not interfere with them.  A landscaped “island” surrounding the upper-level entrance separates the terminal from the parking area and serves as an outdoor waiting area, protected from the noise and fumes of the aircraft.

The capacity of the terminal is based on the predicted annual volume of 800,000 for the year 1970.  Initially, the terminal provides 15 gate positions out of an eventual 23.

The glass-walled waiting room is protected from direct sunlight by a gold-anodized aluminum screen.  The dark brown terrazzo floor minimizes glare, and the ceiling is of mineral fissured acoustic tile.  The steel structural frame is exposed and painted white on both the interior and exterior. 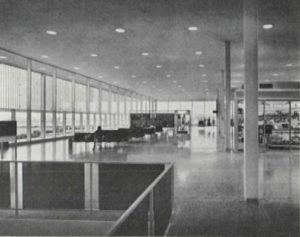 The steel framing system was selected for its adaptability to expansion.  The need to insulate the interior from the noise of jet planes was met by using double glazing and four-inch precast concrete panels within the exposed steel frame.  The concrete panels cost no more than conventional curtain-wall construction and provide comparable flexibility for future changes.  The building won an award in the 1962 American Institute of Steel Construction Architectural Award of Excellence Program and was the subject of a Workshop-Critique published in the 1962 P/A (Progressive Architecture). 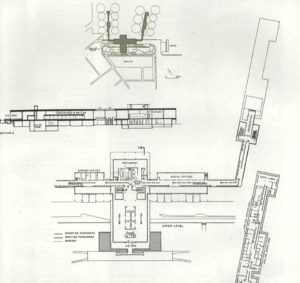 Since the depth of the steel members was limited by the need to minimize floor-to-floor height and maintain a consistent appearance, the members could not be selected solely on the basis of weight.  The cost of the additional steel required was more than offset, however, by savings on wall area and details.

The exposed steel has been painted white on both interior and exterior.  The precast panels have a large green granite aggregate.  Interior walls are covered with neutral tan vinyl, except where accents of red-orange and yellow vinyl are used to identify the two boarding fingers.

Gold-anodized aluminum sunscreens on the sides of the waiting room wing have been placed 10 ft beyond the glass, so that they need not extend below door height.  On the southwest face of the ticketing and baggage area, gray-tinted glass has been used and special retractable vertical blinds have been installed for protection from the low sun of the winter months. 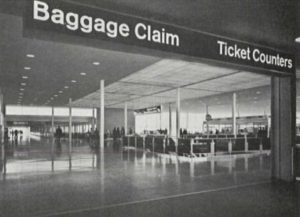 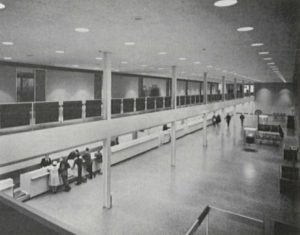 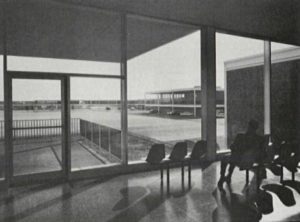 The control of signs and concessions displays was given special attention.  The graphics consultants designed all signs, including those for tenants.

The final cost of the terminal was $4,250,000, exclusive of landscaping, graphics, furniture, fixtures, finishing of tenant spaces, restaurant equipment and fixtures, and architects’ fees.

A separate control tower, also designed by Murray Jones Murray, was constructed concurrently with the terminal. 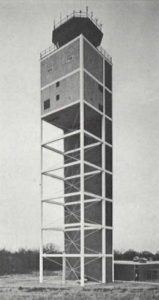 The only enclosed parts of the 157-ft structure are the observation cab at the top, the space for essential related equipment just below it, and the stair and elevator shaft.  The bulk of the equipment and auxiliary spaces are located in a connected structure at ground level, which can be readily expanded and rearranged as needs change.  The white-painted steel frame and the precast granite aggregate in-filling panels are consistent with the exterior of the terminal: 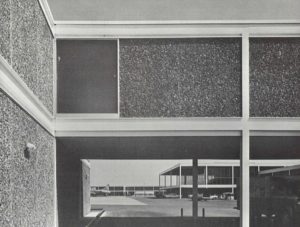 Today, the Tulsa Airport is much bigger, but it retains many original features and still looks like a mid-century modern masterpiece. 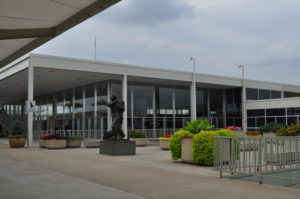 Endangered Places and Some Fun Saves Travelling Through Time Along 23rd Street, Part 1
Click here to go back to previous page